Segway Rolls Out New Transporter: Like A Wheelchair, But A Car 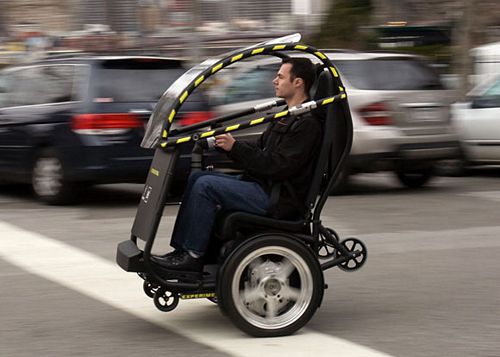 It’s fair to say that the Segway has been one of the more interesting failures of our time.  Despite receiving a lot of attention and coverage, the single-passenger motorized transport device simply never took off.  That’s not to say Dean Kamen’s about to give up, though.

Apparently, Segway has been working with General Motors to develop a new personal vehicle that looks like a logical evolution of the original machine.  Dubbed the P.U.M.A. (Personal Urban Mobility and Accessibility),  it retains the Segway Personal Transporter’s two-wheeled capabilities, while allowing for a comfortable seat, two passengers and a considerable upgrade in speed.  Yes, it now looks like the coolest wheelchair ever!

The new self-balancing ride can run at speeds of up to 35 mph, well above the original Segway’s paltry 12 mph.  Juicing up on pure electricity, it offers a maximum driving range of 35 miles with a single charge on the onboard lithium battery.  Size is about 1/6th of a regular car and half of a Smart Fortwo.

An interesting feature expected to come with the P.U.M.A. is an ability to communicate with other vehicles around it, potentially reducing the risk of accidents on the road.  It also comes with smaller sets of wheels both on the front and the back, which will likely be used when the vehicle is stalled in traffic or when the power is turned off.

Why anyone would buy this instead of an electric motorcycle, though, is currently beyond me.  At the least, even the dorkiest,  greenest motorcycle seems cooler than this.  For a wheelchair, however, this looks like a killer beast!  GM and Segway are currently showing off the P.U.M.A. at the New York Auto Show, with media testing scheduled in the Fall.