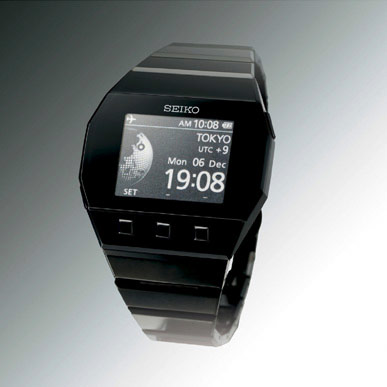 I’ve seen e-ink watches and they are just bad. Quite bad. Seiko was the first company to bring EPD technology back in 2005, so it’s only appropriate that they also come out with the best one we’ve seen so far: the Seiko “Future Now” EPD watch.

Introduced at Basel World 2010, the watch retains all the legibility benefits of electronic ink, all while ably displaying a wider range of imagery and data onscreen. How did they do it? It uses an “active matrix” electronic ink display, which boasts much higher visibility, even from angles up to 180 degrees. Yep, just like an LCD panel.

The Seiko “Future Now” sports an all-black body and strap (with super slim 1mm bezel), with an electrophoretic display that crams a full 80,000 pixels (300 dpi) in four different shades of gray. Based on the photos, it looks near-LCD in quality, with smooth lines and slightly more complex images than what we’ve seen in the past. Apart from the improved screen, the new technology also allows for improved power consumption (reportedly 1/100th compared to similarly-sized panels currently used in ebooks), although no details were given how long it can go before requiring a recharge.

While the pictured watch is only a demo prototype for Basel World, Seiko claims the one actually intended to hit stores will only be a slightly modified version. If they can come up with a nice-looking case that doesn’t look like a Casio from 1984 (which is what that one on the photo resembles, by the way), this could be a potential hit.

Check out the video below for Seiko’s watches over at Basel World.  The “Future Now” comes on around the 3:17 mark.