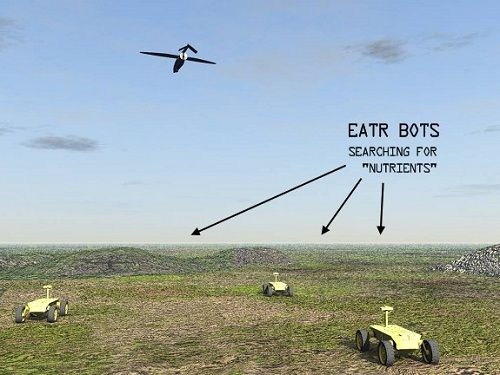 Robots have long been expected to play a major part in modern warfare. The Energetically Autonomous Tactical Robot (EATR) will likely be among them, not only helping kill enemies in the battlefield, but eating them too.

Designed for long-range tactical missions, the robot can endure extended hours of operation in the field without needing manual or conventional refueling. Instead, it powers itself by converting found organic materials into biomass. It will literally scour for energy sources, consume them and extract the needed energy all on its own.

The marketing literature for the EATR attempts to paint it as a benign creation that will forage the grounds for items it can ingest, which includes grass, trees, plants and used wood. Oh, by the way, it can feed on humans too – which are more likely during military operations, considering war zones are littered with dead bodies just waiting to be picked.

Originally conceived by Robotic Technology Inc. in 2003, the robot is still under development, currently in a demonstration project phase. In its current form, it uses a Waste Heat Engine, which burns up fuel to heat water in a closed loop via an external combustion chamber. Future plans for the machine go beyond military applications, though, with EATR-based combustion engines (for unmanned vehicles) another likely result.

Isn’t that just neat? A robot that can keep itself alive by eating you. Sounds like a recipe for a robot invasion to me. Just imagine an army of EATRs in the future, breeding humans like cows for their own sustenance?