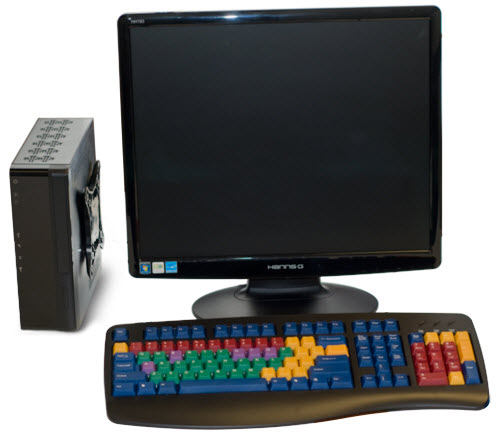 Old people use computers, too.  And, if you’ve got grandparents who rely on their favorite grandchild for tech support, you know they usually mess it up.  This KiWi PC  should prove to be a lower maintenance, more senior-friendly option.

Since Windows machines are notorious for being a veritable magnet for viruses and malware of all varieties, this computer washes itself clean of all of Microsoft’s OS iterations.  Instead, it’s running a custom version of Linux Ubuntu that’s been tweaked for the more aged, less-technically savvy members of the population.

Details of the KiWi PC include a 1.66GHz Atom CPU, Intel GMA 3150 graphics, 2GB of DDR3 RAM, a 250GB HDD, a DVD optical drive and the usual salad of basic connectors.    They throw in that colorful keyboard in the mix, as well, though we’re not sure how green and yellow keys are supposed to give older users an easier time typing.

The senior-friendly Linux build gets a customizable UI called “Me Menu” on top, presumably with bigger fonts for easier visibility and what sounds like a shortcut-based system.   They also threw in a software called Evolution Mail, a universal email inbox that simplifies the process of sending funny pictures and forwarding chain letters.

The KiWi PC is available now for $499.  Granted, that sounds a bit much for a barebones nettop computer with a monitor and keyboard thrown in, but we doubt the old people they’re expecting to buy these would know any better.  Still, a PC designed for older folks is a necessity — one we’re glad someone is servicing.