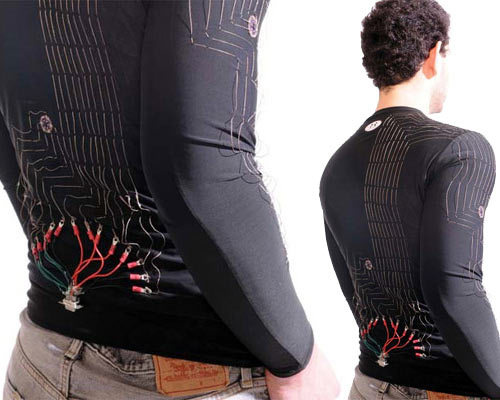 The more exhausted you get, the sloppier you become. While playing a sport, that can lead to serious injuries. In Major League Baseball, physical damage like that can result in millions of dollars in losses. Star pitchers may not need to suffer from such predicament with the Sensor Armor, a data-logging compression shirt that helps coaches figure out when the man in the mound needs to sit out for a brief respite.

Designed by three engineering students from Northeastern University, the wearable technology uses embedded sensors and a grid of conducive threads to track its wearer’s mechanics during a game. The idea is to pipe this information back to a computer, so that coaches and trainers can monitor a pitcher’s vitals – helping them analyze the effects of fatigue on each individual so they can adjust accordingly.

At it’s current configuration, the lightweight Sensor Armor shirt will need to be hardwired to a PC in order to work, which doesn’t exactly make it usable while throwing in the middle of the field. Future versions will perform the same wirelessly, though, allowing players unimpeded movement in the mound, all while having their data piped to a machine on the backend.

According to Marcus Moche, one of the three students, “No single device for measuring the quality of pitching mechanics currently exists,” making the design a breakthrough that is probably sorely needed in professional baseball. For pitchers, after all, fatigue usually means a loss of mechanics, increasing the likelihood of causing tears on their elbows (UCL injury).

Current methods of analyzing pitching mechanics are restricted to laboratory settings, making the standalone nature of the Sensor Armor a potentially vital tool.  It’s still in the early stages, though, so don’t expect it for a while.