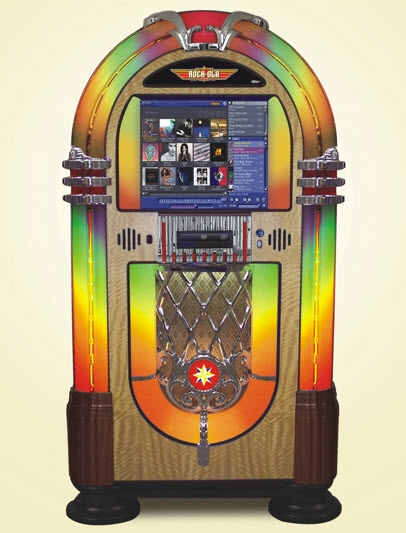 Playing music on your media center PC is fine.  But there remains something about giant, light-up jukeboxes that just tickle the imagination.  Yes, even when they do come with a totally modern touchscreen interface.

Rock-Ola just announced their newest touchscreen jukeboxes and they look mighty dandy, in that nostalgic, Back to the Future kind of way.  Called the Series IV Touchscreen Music Center, the machines pair modern digital music technology with the traditional styling of colorful jukebox cabinets right out of your mom’s (or grandma’s) teenage years. 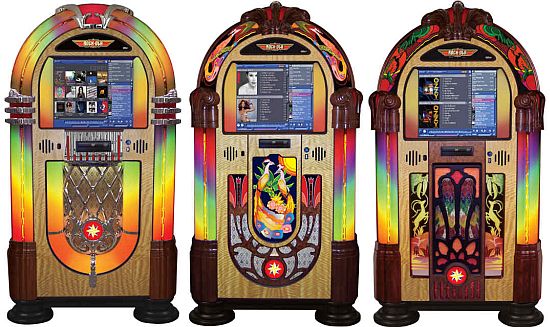 Designed for home use, the new models build on the design of the company’s previous Nostalgic line of jukeboxes.  All four styles (Bubbler, Peacock, Harley-Davidson and Gazelle) come with similar internals, but feature varying lighting, colors and accents for their 23-inch deep cabinets.  Rock-Ola also adjusted the rear layout to provide faster access to the controls, LED indicators and external speaker connections.

The Series IV Touchscreen Music Center runs a standard PC using Intel’s Atom platform, paired with a 19-inch touchscreen display and the Qsonix Digital Music Management System (with its fancy drag-and-drop UI style).    It uses professional-grade Peavey amplifiers that deliver 800W a channel, while generating very little heat, eliminating the need for cooling fans.  Up to 15,000 full CDs can be stored on the 1TB internal hard disk, while new songs can be added using the integrated optical drive.

Despite the digital pedigree, the Series IV jukeboxes do embrace the old get-up-off-your-butt-to-play-a-song aesthetic.  Which means there looks to be no remote (we could, hopefully, be wrong), making home use painfully inconvenient.  But, hey, you dig your tunes retro, right?