Set In Stone Shows How Concrete Can Be Used As An Interactive Interface, Surprisingly Succeeds 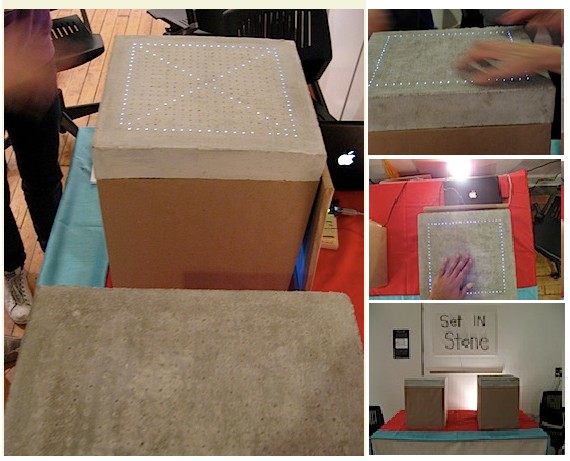 Outfitting concrete with embedded LEDs is one thing.  Throwing in an Arduino, on the other hand, makes you wonder what the heck that slab of concrete will be programmed to do.  For the Set in Stone project, it’s all about setting up a cool interactive concrete interface that responds to surface contact and communicates with other similar contraptions.

Each concrete block measures 13 x 13 x 2 inches and comes decked with a 20 x 20 grid of LED lights (400 total) slotted through a plexi-glass panel.   Users can trace figures on the grid, which should activate the lights, creating an interactive display of sorts.  Implemented on a larger scale, you can have similar systems installed on walls and sidewalks, essentially creating a large computerized interface embedded on the infrastructure.

One fiber-optic cable is attached per lighting panel, allowing each of the LEDs to be controlled individually.  The cement itself was fitted with a solid-core hookup wire attached to a Qprox sensor to make it touch-sensitive.  All of the electronic components are wired to an Arduino, which handles the data processing.

Set in Stone’s installation uses two such setups that are able to transmit data to one another.  If you trace a shape on one of the concrete slabs, for instance, it will be automatically replicated on the other block.  The result is a two-way communication facility between two otherwise inanimate stone-like panels – which is way cool.

While this version of Set in Stone doesn’t offer many uses, you can probably imagine future applications for similar setups.   Two player Chinese Checkers on a slab of concrete, anyone?

Find out how they put the installation together on the link below.