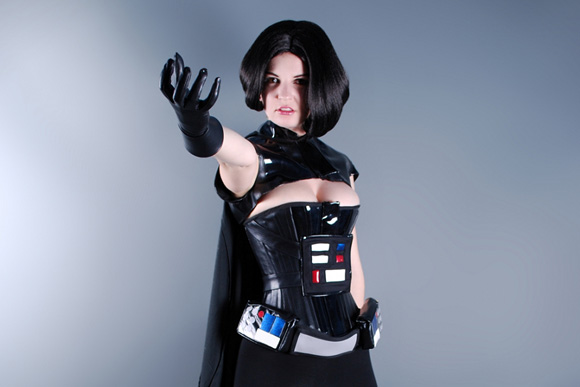 Looking for a way to spice up the marriage? If the husband’s a big sci-fi nerd, these Star Wars-inspired corset costumes should do the trick without breaking a sweat.

Yes, that’s a healthy mound of cleavage sticking out of the female Darth Vader’s close-fitting garment. And I can’t take my eyes off it. Even with all those distracting accents and what not. Let the heavy breathing commence. 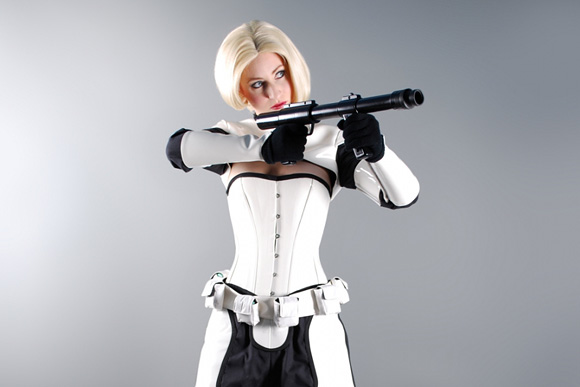 Created by California costume outfitter Evening Arwen, the sexy attires are unlicensed ripoffs of Darth Vader and Imperial Storm Troopers costumes. Billed as the Galactic Lord Corset Costume and the Galactic Trooper Corset Costume, both feature body-hugging vinyl corsets, matching gloves and shoulder shrugs, and a utility belt with storage compartments (so you don’t have to carry a purse). The former gets a flowing black cape draped around the back, while the latter completes the look with braces for both the biceps and forearms, along with a pair of matching shorts.

You can get the Galactic Lord Corset Costume for $600 and the Galactic Trooper Corset Costume for $500. They should come with all the accessories in the photos, except for the cleavage. That one’s all yours. In case your bosoms can’t deliver, we’re pretty sure those can be authentically recreated with gobs of tissue paper and masking tape, so it’s all good.