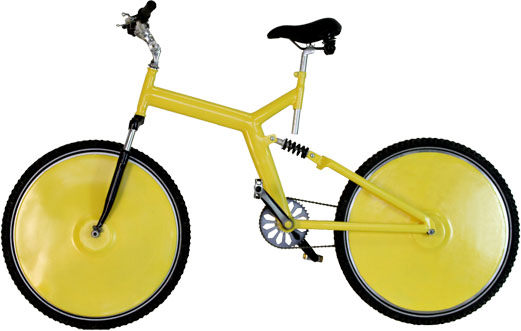 Daymak Inc. calls their Shadow eBike “the most advanced electric bike today.” The claim does sound a little lofty, but I’ll give them this: it’s definitely intriguing.  Not because of the ultra-bright yellow paint job either.

How? Well, it’s the first bicycle I’ve seen that’s both spokeless and wireless. You heard that right. There are no spokes on the wheels and there are absolutely no wires – not even ones hiding inside the frame. It’s not the kind of thing that will compel me to buy, but I’d certainly like to try one out.

The Shadow eBike is an electric-powered bicycle measuring 3.6 x 2 x 5.6 feet (H x W x L) and weighing 59lbs. Like we said, it’s completely free of wires and spokes, with the entire electronic mechanism hidden inside the closed wheels. How does the brake, throttle and pedal assist work? According to Daymak, it all happens wirelessly. Other bike details include a choice of motors (500W or 1000W), a single or dual 36V battery setup (31 miles and 62 miles traveling range, respectively) and a top speed of 20mph. 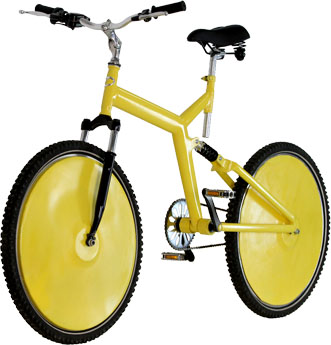 Why bother going wireless? The company claims it’s because most electric bike malfunctions happen either because of loose wiring or trouble at connection points. Getting rid of wires allows them to bypass that potential sticking point completely. As a secondary function, you can also plug in your handheld gadgets to the battery, in case you need an extra boost in power while on the road.

You can get the world’s first wireless electric bike beginning June. Price for the 500W Shadow eBike is $1,499. Only 300 will be made in the first run, though, so better reserve yours if you want to score one.