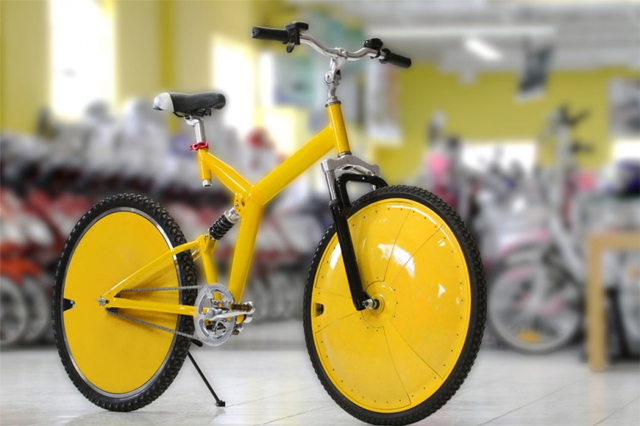 All those cables draped along a bicycle’s frame are irritating.  Problem is, they’re necessary.  So much so that they remain even with modern electric bicycles.  Well, that ends now with the Shadow Ebike, billed as “the world’s first wireless power-assist electric bicycle.”

First, let’s get the obvious out of the way.  The bike looks like it could have been styled a little bit better. The disk wheels are kinda not easy on the eyes but alas, they are necessary to eliminate all those pesky cables.  While I’m sure there are some wirings hidden away from sight, there are absolutely none that are visible on the bicycle’s exterior.  That means, no cables to trip on or accidentally hook with your leg, hopefully paving the way for a more comfortable riding experience.

The Shadow Ebike uses ISM 2.4 GHz wireless technology to communicate actions that are otherwise controlled over wires, allowing it to work like a regular bicycle even with no cables whatsoever.   All wireless communication is managed by a Daymak Drive controller installed on the front wheel (under the disks), which receives user input (e.g. hitting the brakes) and carries out the appropriate action.

Aside from the controller, the motor (either 250W or 350W) and the 36V battery  also rest hidden inside the front wheel.   The battery, which has a 40km range on pedal-assist mode, can be charged via a charging port on the same yellow disk.  A USB port is also available there, so you can use whatever power is left in the battery to trickle a charge onto your cellphone during emergencies, as well as a LED battery indicator.

Creator Daymak is currently taking pre-orders for the Shadow Ebike, which is slated to ship April 30, priced at $1,999.