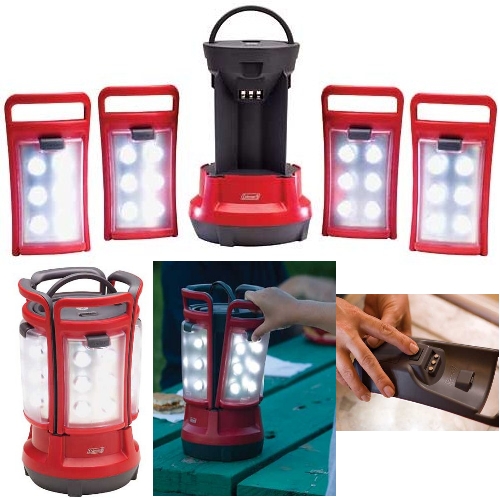 Camping with goofballs who keep forgetting to bring their own flashlight?  Be the dependable guy with the Coleman Quad Lantern, a battery-powered lamp with four detachable panels that you can distribute to your not-as-ready companions.

Each panel fits on one side of the main stand, which you can use as primary lighting for when you’re gathered around the dinner table.  Once it’s time to split up into your own tents, you can pick up one panel each, allowing your whole entourage to carry their own illumination, even though they’re worthless bums who can’t even be bothered to bring their own lighting equipment.

The Coleman Quad Lantern has a base station styled like a blender (at least, I thought it was one at first sight), with four docks along the sides where you can park the detachable sections.  It has a handle right at the top, along with a master switch, which you can use to turn on all four panels at the same time.  The stand also works as a charging dock, feeding juice to the panels’ own rechargeable modules for up to 75 hours.

Six 5-mm LEDs go on every panel, all of which combine for 190 lumens and a 26-feet range.  Each section comes with its own handle and switch, so you can use it as a separate lantern on its own.

Since the rig is designed for outdoor use, the Coleman Quad Lantern works strictly with D-sized batteries (eight of them), rather than a wall plug-in.  It’s available directly from Coleman, priced at $69.99.