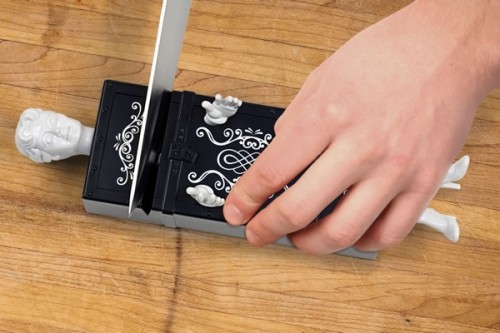 Sawing a woman in half while she lies down inside a box with her limbs hanging out is probably one of the oldest stage magic tricks.  And people still keep doing it again and again.  Now, you can perform the same routine any time you want in the kitchen with this Sharp Act Knife Sharpener.

Of course, instead of a real woman, all you get is a ceramic model.  And instead of sawing her in half, you just use the creases in the figurine to bring your dull blades back to life.   Just use your imagination, though, and it could be fun.  No, really.

The Sharp Act is a manual knife sharpener made from ceramic stone.  Molded into the shape of a woman inside one of those trick sawing boxes, it measures 8 x 2.5 x 2.25 inches.  The creases with fine grits are installed on the upper part, so you can perform your cutting strokes with one hand while holding it on the bottom end with the other.  The figurine hands act as a barrier between the blade and the hand keeping the sharpener steady.

Sure, an electric knife sharpener will probably serve you better, refashioning your blades faster than this thing can ever imagine.  We doubt it’s half as worthy of a laugh or two, compared to this thing, though.  That is, unless you accidentally cut yourself, cry like a baby and post it on YouTube.  That would be hilarious.  Just make sure to put some bacon band-aids on there afterwards.

You can get the Sharp Act Knife Sharpener from the Neatoshop, priced at $11.95.