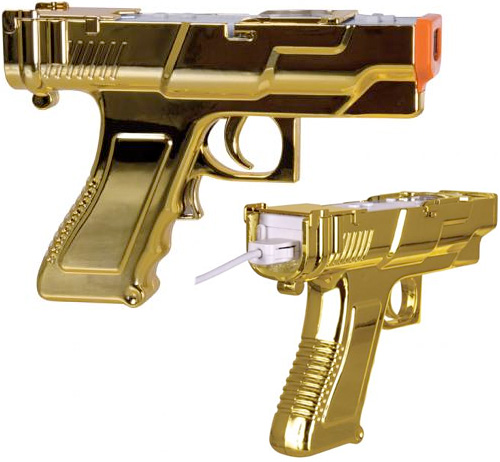 Avid gamers would know that a remake of the N64 classic GoldenEye 007 is currently upcoming for the Wii.  So you can play the game with every bit of flair James Bond brought to the reputation of the international spy, it’s only fitting to be shooting your graphically-rendered onscreen bad guys with this: the Gold Edition SharpShot.

Created by peripheral maker DreamGEAR, the shiny “pew pew” accessory is nothing more than a shiny, metallic-finished version of their standard Wii gun controller.  For some reason, though, that full coat of gold paint over the body just elevates it to a level worthy of play for the world’s most famous fictional spy.  Yes, that will be Jason Bourne.

The Gold Edition SharpShot, like the standard version,  is a plastic gun accessory that’s compatible with all first-person shooters, rail shooters and target-shooting titles on the Wii.    It features dual triggers for cheating faster rate of fire and is compatible with Wii Motion Plus.  While colored gold, the entire body is just plastic, so you can’t exactly haul this down to the pawnshop for a quick hit of cash.

Despite the absolutely perfect fit with the new James Bond title, the peripheral actually isn’t a tie-in.  It’s been around, nobody just cared until now.  Guess who lucked out?

We’re not sure of the exact date when the man with the golden gun comes to the Wii.  But you can be that dude now, in front of your TV, right on the living room couch while playing Chicken Blaster.  The Gold Edition SharpShot is available directly from DreamGEAR for $24.99.