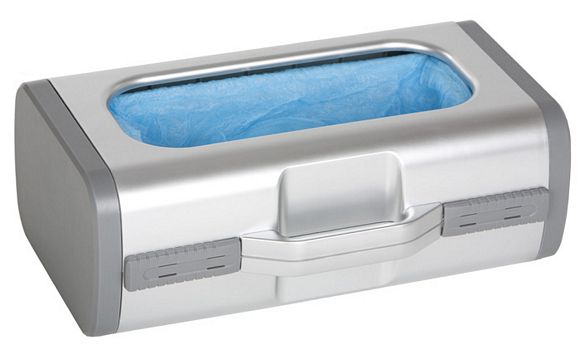 Your shoes are dirty.  As such, it needs to be contained.  Shoe booties have long been the de facto protection used by operating rooms and similarly sensitive places to keep contaminants that could be hiding on your footwear away.

Of course, putting them on can be another hassle, since you’ll have to touch the potentially dirt-infested gear in order to fit shoe covers over them.  Well, not anymore.  Simply put your foot in one of Shoe Inn’s automatic dispensers and it will slap an insulating piece of plastic over it all on its own – just like lollipop machines at the factory auto-fitting wrappers over the candy.  Yeah.

Called the Shoe Inn Go, the foot-packing contraption measures about the size of a toolbox and can be carried around like one.  Each dispenser, of course, will carry a bunch of disposable shoe fittings called Reboots, which are cheap, waterproof and no-slip, making them an ideal solution for keeping sensitive areas sterile and clean.  Simply install refills of the shoe covers into the dispenser as soon as you run out and you’re all set to start using them again.

Because of its function and portability, the system has found much more uses than mere hospitals and laboratories.  In fact, Shoe Inn’s customers include people from a wide variety of professions, including restaurants, real estate, spas, daycares and other industries where cleanliness can prove of immense value.  I suppose burglars and spies who are smart enough to leave no shoeprints probably use them too, but the company doesn’t really expound on the probability.

The Shoe Inn Go is available for $100, with refill prices starting from $15 per packs of 100, depending on the material.  Future spies and home robbers will do well to have in their arsenal.