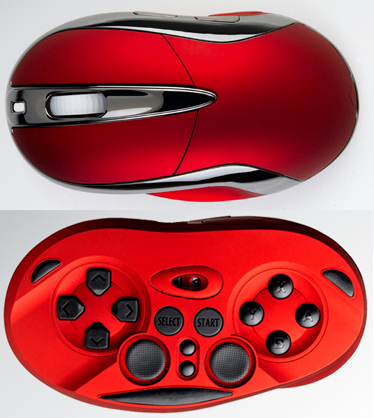 Need a dedicated PC game controller while at work, but can’t let anyone know you play games while burying your head in your cubicle?  Here’s the sneaky accessory to do the trick: the Shogun Bros. Chameleon X-1.

In serious mode, it looks like a regular mouse peripheral that you can leave on top of your desk, attracting no attention whatsoever.  Once the coast is clear, all you need to do is flip the gaming switch and turn the mouse upside down to get a full-featured gaming keypad.

The Shogun Bros. Chameleon X-1 literally packs full sets of controls both for use as a mouse and as a gaming controller.  A total of 21 buttons line the accessory (14 on the bottom and 7 on top), including the usual mouse controls (left, right, scroll), four direction buttons, two analog nubs, a pair of small buttons between the nubs, four action buttons, four shoulder buttons and the usual Select/Start pairing.

For those who actually bother with the technical details on their mouse, it will feature a 5-stage adjustable 1,600-dpi optical sensor with a 125Hz polling rate.  The entire thing wirelessly connects to your PC via a USB dongle transmitting at 2.4GHz.  Only Windows machines appear to be supported (at least, for the initial release).

While we’re not sure how good the Shogun Bros. Chameleon X-1 will be, the sheer ingenuity of the design makes me want to stock one up for every computer I own.  It’s slated for release in the first quarter of 2011, priced at $55.