Show Off Your Texting Prowess With The Textminator, An SMS-Battle Arcade Box 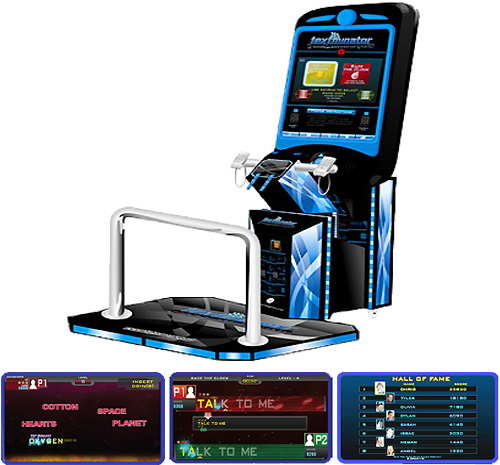 Tired of shooting zombies, racing roadsters and putting together attack combos?  Head on over to the less-popular side of the arcade and pop your dollar on the Textminator, a real-life arcade box that turns sending SMS messages into a game.

What? You heard that right.  Instead of memorizing button-mashing combos and showing off your joystick prowess, you wrap your grubby thumbs around a cellphone controller, racing against the clock to punch the words and phrases that appear onscreen.  Seriously.

The first-of-its-kind (and, hopefully, the last) coin-op arcade box, the Textminator challenges players to put their texting skills to task.  You can race against time in single player mode, aiming to put your score at the top of the machine’s leaderboard.  Fancy a more competitive atmosphere?  Challenge someone to two-player game, going head-to-head to determine who really is faster at thumbing through small keypads.

A large 26-inch LCD display shows the words you’re supposed to type on the stainless steel T9-style keypads, along with the time counting down.   It comes with an integrated camera that takes your picture for display on the Top 100 Leaderboard, so everyone knows that you spent perfectly good money playing a stupid game and can insult you later when they see you on the street.

According to the sales page, the Textminator comes in two configurations, Standard And De Luxe.  The former appears to be a smaller version of the machine, in case you want one at home.  Next up, the Dvorak Layout Medical Transcription Typing Fighter.  I called it first.