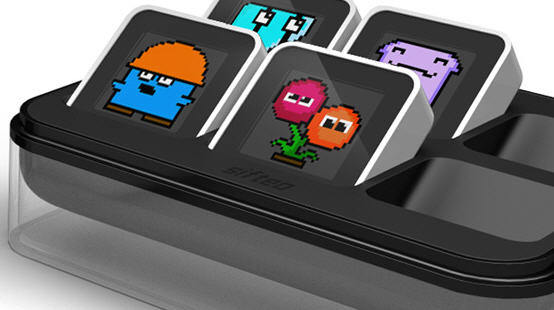 Think kids already spend too much time staring at screens now?  Wait till Siftables, a new set of cookie-sized computers with near-limitless interactive possibilities, come out.  Then you will really start to worry.

Now, enough of the doomsday pronouncements.  This thing is really way coooool.  First seen as a  project out of the MIT Media Lab, the toy has garnered so much interest that the researchers behind it have now founded a startup company, Sifteo, to produce them.

What exactly does it do?  Siftables are computerized blocks that have a screen on one side.  Yep, they can display pictures.  Whoooppppeeeee.  What makes them exciting, though, is that each one comes equipped with the ability to detect motion, sense other Siftables in their proximity and communicate wirelessly.   While those capabilities sound simple, they do endow the toy with a seemingly endless range of possibilities.

To put it simply, you can program them to become a whole host of things.  The Scraboogle application, for instance, turns them into scrabble pieces displaying one letter each.  Form a word and they’ll sound off with approval: “You are right.”  A sequencer app, on the other hand, allows them to become musical instruments, dropping samples (different Siftables) into a looping track (made up of other Siftables), apart from adding gesture-controlled effects.  There are plenty more samples out on the company’s website and they’re all downright amazing.

According to Sifteo, they’re still quite far from being ready for production.  Don’t worry, though – they’re spending the year developing games, running tests and working with manufacturers to further improve the technology.   Definitely one to look forward to.