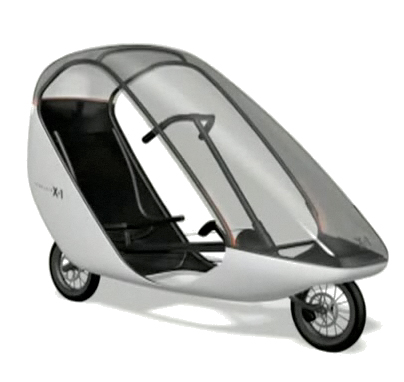 With electric bikes slowly carving a niche in the transport world, it won’t be long before all the weird varieties begin popping up.  Here’s one that’s a definite shoo-in for the category: the Sinclair X-1.

Created by English inventor Sir Clive Sinclair, the vehicle runs on two wheels like any conventional bike.  That’s where the “traditional” part ends, though, as it also wraps the bike in a bubble shell, with a shape reminiscent of an egg (now that I think about it, maybe a dinosaur head is more apt).  Made from waterproof acrylic, the outer body allows the bike to remain usable even in wet weather – a fair trade-off for the odd looks you’ll undoubtedly incur.

The Sinclair X-1 runs on a 190-watt MCR pancake motor, linked to the rear wheel via a fixed-gear drive chain.  A rechargeable 24V lithium-polymer battery juices the motor, with space for a secondary pack if you want longer range.  Inside the cabin, it’s styled like a recumbent bike, with reclining nylon seats and  adjustable chopper-style handlebars (with suede cover).  Other details include disc brakes (both front and rear), a steel chassis and a carbon-fiber lower shell.

It is classified as a legal bike in the UK and can be driven by anyone over 14, including along cycling paths.  That alone makes this sound like an extremely fun recreational ride, although its performance on sloped roads will probably be something to be concerned about (being a recumbent electric bike should make it a tad more difficult, but it only weighs 30kgs, so that might not be an issue).

The price happens to be one of the most interesting parts, as the Sinclair X-1 will actually be quite affordable at just £595 (around $960).  You can reserve one now for £100, with deliveries slated for July 2011.