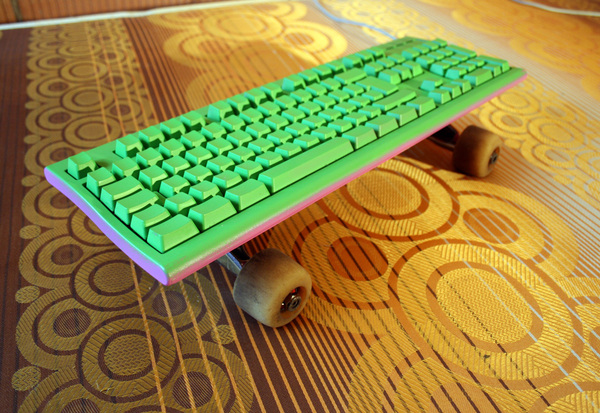 Just because it’s not functional doesn’t mean it’s not awesome.  The Skatekeyboard, an art piece that combines two very different things (hint: the name’s a dead giveaway), looks good despite the obvious dissonance it creates.  I blame the neon.

Created by artist Tobi Leingriber, the odd-looking contraption outfits a full-sized PC keyboard with skateboard wheels, making it functionally useless as either one or the other.  To make sure it gets noticed, the board is clad in neon green and pink paint, making for quite an unusual sight.

Can you take it to the skate park and throw down with the cool kids?  Probably.  Of course, you’ll likely end up with some slight discomforts, like a busted-up face and dislocated joints.  You’re a tough guy, though, you’ll get over it.  Seriously, it comes across as one of the stupidest things ever created – but it looks so good.

The Skatekeyboard will be shown, among the works of other artists, at the upcoming BLK River Festival in Vienna, Austria.  It sure would look rad if you can do a handstand on it and type a few stuff in while sliding down some pipes, but I wouldn’t get my hopes up.  I’ll settle with not rolling off the table while I input a spreadsheet.