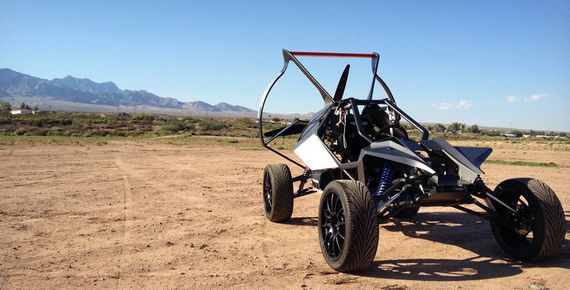 Along with jetpacks and robot butlers, flying cars is another one in a disappointing string of technologies we all thought will be mainstreamed by this point in history yet aren’t.  Instead, we continue to languish in outdated modes of transport while occasionally enjoying technological marvels like Candy Crush.  Well, I don’t really mind.  But what about the forward-thinkers, the early-adopters, the true technophiles who want a taste of the future today?  Well, they might soon be able to satiate their flying car desires with the SkyRunner.

An offroad buggy, the vehicle doubles as a para-sailing vehicle, taking to the skies using a propeller and para-glider wing combo.  That means, you can drive it to the mountains right off a cliff and para-sail the rest of the way back into civilization.  Or something like that. 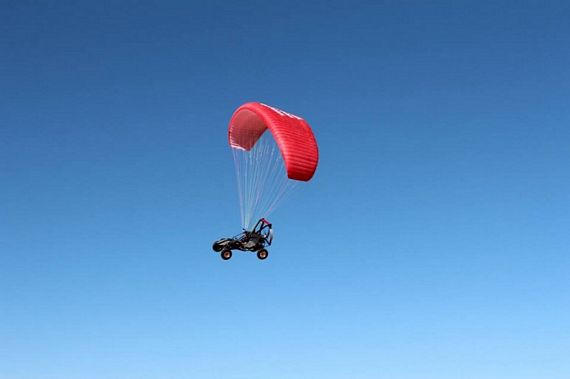 Originally based on the Parajet Skycar, the SkyRunner is a lighter, better-flying and less-polluting version of the biofuel-powered ride, aimed for actual driving and flying by everyday adventurers with a seemingly unquenchable deathwish.  Since it’s built for offroad driving, no runway is required to take flight — when it’s time to catch air, the propeller simply fires up to help propel the land speed to around 37 mph, at which point the lifting force of the wing sends the whole vehicle flying like a balloon.  During flight, the driver only has to manage the pitch and roll,  considerably lowering the learning curve, although a sport pilot license is required to drive it. 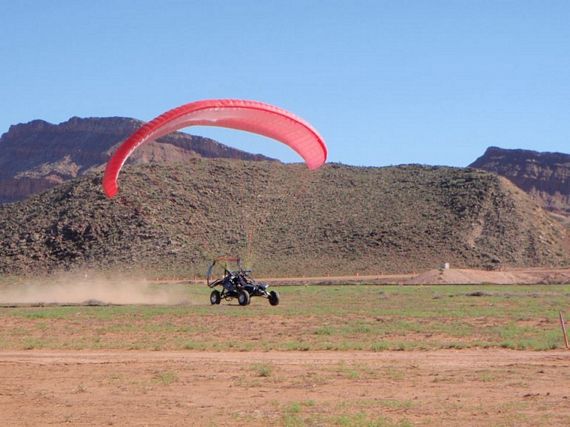 Everything is powered by a 1-liter EcoBoost direct-injection turbo engine, which can push the car to speeds of 115 mph on land and 55 mph airborne, with a 0 to 60 mph land acceleration of 4.3 seconds.  A full tank of gas should let it drive 500 miles of terrain, as well as fly 200 nautical miles of air and sky.  It also comes with a reserve chute that can be deployed in case of emergencies (like when the wing gets shot with a laser blaster from an alien invader ship).

Unlike many flying cars we’ve seen, the SkyRunner is actually in the process of production now, with an estimated delivery date of early to mid 2014.  Price for a fully-loaded unit is set at $119,000. Check out the flying SkyRunner in action below.