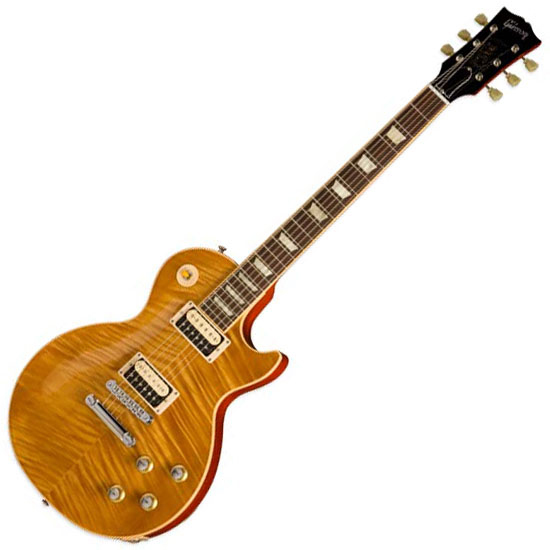 While I’m not sure that Slash remains relevant in today’s music scene, there’s no question he stands as an easily-recognizable figure among a mass of guitar-toting heroes from the glory days of poodle hair and spandex. There’s something about that image of the guy with a funny-looking top hat, leather jeans, curly hair covering his face and a classic ’58 Les Paul that managed to entrench itself among the mass consciousness. In honor of the man, Gibson has announced the new Slash Appetite For Destruction Les Paul, a classically-styled six-string that follows all the intricacies of Slash’s favorite instrument.

Scheduled for release to coincide with the 44-year old’s first solo album due this year, the limited-edition guitar is based on the same axe that Slash wielded in the record that introduced him to the world: Guns N’ Roses’ multi-platinum selling “Appetite for Destruction.” No, it can’t endow you with magical fretboard skills, but it’s guaranteed to let you replicate the same tonal qualities that Slash brings to all of his performances.

The Slash Appetite For Destruction comes equipped with classic hardware from original Les Paul standards produced between 1958 and 1960, with added modifications as requested by the iconic guitarist himself. Paired with a costume, you can literally pretend to be Slash while hauling this around, with its traditional weight-relieved mahogany body, AAA Figured maple top, rosewood fingerboard, custom quarter-sawn mahogany neck profile (rounded 60s shape) and a nitrocellulose lacquer finish to mimic a beautifully-faded vintage look. Features include a set of Seymour Duncan SS Alnico II Pro Slash humbucking pickups, Switchcraft selector switch, Kluson-style tuners and TonePros Tune-o-matic bridge.

Wearing poodle hairdo and leather pants may no longer be a good idea, but rocking with the same awesome guitar as Slash will always be in fashion. You can score a Slash Appetite For Destruction Les Paul beginning April for $4,728. It’s a limited edition, so you’ll be smart to reserve one.