Sleek Audio SA7 Headphones Will Last You A Lifetime 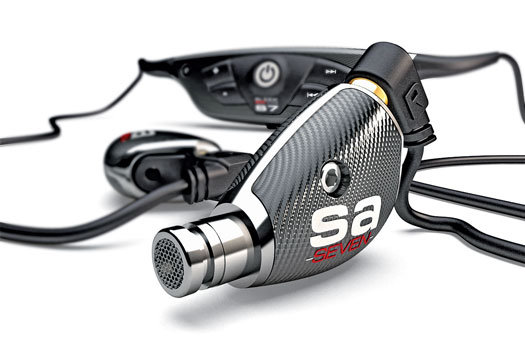 Sad to say, but most people do spend more money on a case for their iPod than a good pair of headphones. The Sleek Audio SA7’s $400 price tag might sound excessive to those used to $10 cans, but if you want headphones that’s supposed to last you a lifetime, it’s exactly the kind of purchase you should be looking at.

One of the most rugged headphone designs we’ve ever laid eyes on, the new music accessory doesn’t do plastic like your usual pair of in-ear accessories. Instead, it’s machined from solid chunks of military-grade solid aluminum and carbon fiber, making it virtually crush-proof, no matter how big the butt that sits on it is. The individual audio drivers are protected by shock-absorbent silicone too, which, according to Sleek Audio, can take impact at up to 14,000 Gs (rate of acceleration, for those who aren’t engineers). Suffice to say, this will live through routine abuse with barely a sweat (unless you sweat on it, that is).

How about quality? The Sleek Audio SA7’s build is supposed to boost fidelity too, with the aluminum’s thinner walls creating extra space that allows for an extra octave of highs.  Audio quality should sit up there with the best of them, especially if you’re basing from the company’s previous models.

As with Sleek’s other headphones, you can swap in new soft tips, treble ports and bass ports to alter the sound to your taste. The carbon fiber cover is removable too, in case you need to fiddle with anything inside. It integrates a detachable cord design, as well, so you can simply swap new wires if they get damaged.

The Sleek Audio SA7 is not yet available, but should be in stores soon.