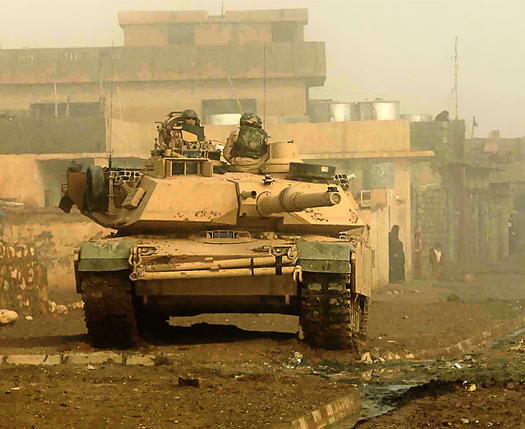 Robots of the future will not only fly and fire a barrage of weapons – they will even know when they’re in danger.  We’re doomed.  That last one will be courtesy of the US Army, who are developing a new Smart Armor that can do a heck of a lot more than absorb damaging blows.

Designed for use in tanks and other military vehicles, as well as extra protection for soldiers (yep, imagine fighting in the ground against a team of Robocops), the intelligent armor plating can diagnose its own damage and identify the kind of ammunition that’s about to hit it.  As a result, it heightens your team’s battlefield awareness, allowing you to make more informed decisions.

The Smart Armor will have have two piezoelectric sensors placed inside it – one that turns electric charges into vibration and one that turns the vibration back into an electric charge.  The more damage the armor takes, the less it will be able to recycle the current (which should be anywhere within 5 to 15 volts), effectively informing the system how bad of a shape it’s in.  Yep, protecting yourself in field can then be just like playing video games – watching a health bar to know when you’re in trouble.

Apart from the damage detection, the sensors can also track the amount of electricity that each bullet hitting it registers.  Based on that data, an algorithm on the backend can determine what types of rounds are being used, allowing the team to make an educated guess about the enemy’s weapons.

According to TARDEC, research into the technology has started several years ago.  There’s no timeline to completion yet, but imagine your car with the same piezoelectric-based shell, showing a health bar on the dashboard.  Awesome, right?