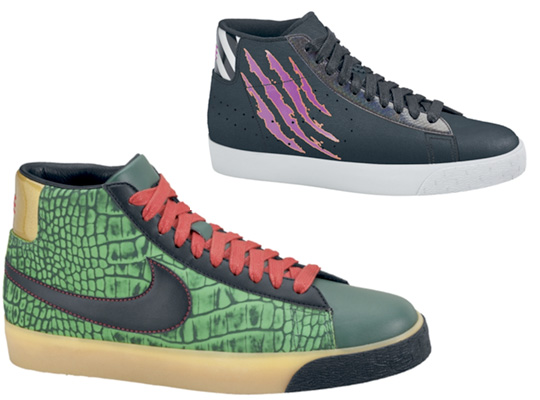 Like to dress up as Godzilla?  As cool as it may be to look like an iconic Japanese monster, there are very few occasions when it’s appropriate.  Later this year, you can do the next best thing – put on the new Nike Blazer Mid “Godzilla” sneakers.

Two pairs of Blazer Mids will come in the Godzilla Pack.  First is an understated design, with a blue colorway and purple claw graphics on the side (like the ones Godzilla would leave on your face if she ever saw you messing with her eggs).  The second is a little louder, comes in green and features the monster’s skin pattern along most of the shoe upper.

Neither model goes over the top in terms of aesthetics, so they’re both wearable for pretty much all occasions (unless you’re supposed to put on a suit – a real one, not a Godzilla suit).  Given that they’re Nike Blazer Mids (which is probably the company’s most popular silhouette), they look mighty awesome, especially for the younger set.

The Nike Blazer Mid “Godzilla” Pack is set to hit premium retailers come November.  Price hasn’t been detailed, but expect it at around $60 to $150, the same going rate for the different variants of the 1972 basketball court classic.