Social Networking Watch Hints At How Connected You Are 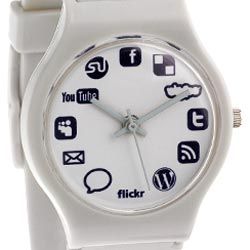 Is it time to log on to Facebook yet? You don’t have to forget again with the Social Networking Watch, which sports the logo of popular social media destinations as a placeholder for the time. That’s if you log on to Facebook at exactly 12 0′ clock, of course.

If you don’t particularly like to schedule what sites to visit at which time (especially since you can’t configure the arrangement of the watch face), the media-centered gear should play nice as a cute wristpiece that shows how clued in you are on the latest internet trends. “Oh that’s Twitter, I like, have 250 fans there now,” you say nonchalantly when your mom asks you what that little symbol at three o’ clock stands for. When the guy at the desk behind you asks about that logo at 11, you can feel marginally superior by going, “Seriously, you’ve never heard of StumbleUpon? Are you from 1999?”

Clad in ivory white, the Social Networking Watch reminds you about the important things in life – staying connected and being popular on the internet, of course. It’s also cool enough to look hip, despite the decidedly cheap make. There’s not much details on the timepiece, but for $18, how much information do you really want to know?