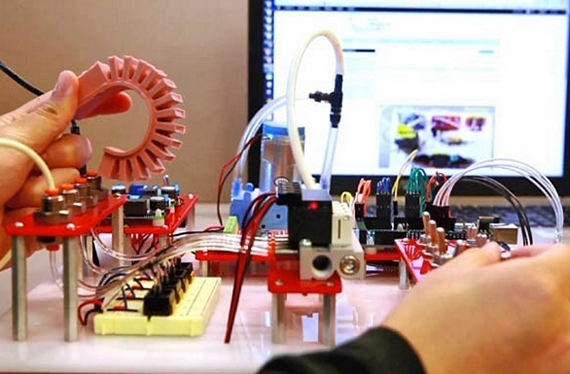 If you’ve already come to terms with a future filled with robots that look like the hunks of steel they’ve always been depicted in the movies, you’ll probably be very upset when the future comes.  Why?  Because instead of shiny tempered steel shells, they’ll likely be decked in shells as soft as human skin.  And they’ll have soft, flexible body tissues, rather than the rigid mechanisms inside factory machines that allow them to move like real living creatures.  Yeah, the soft robots of the future are going to be creepy as heck.  And a new website called Soft Robotics Toolkit is looking to bring that future closer than you’d probably like.

Designed for DIY enthusiasts and robotics researchers, it’s a repository of existing knowledge and research about soft robotics.  Published and maintained by Harvard’s School of Engineering and Applied Sciences, it’s a treasure trove of resources for designing, fabricating, modeling, characterizing, and controlling robots that draw inspiration from biological systems.  Basically, everything a mad scientist needs to get up and running with a future army of squishy killer automatons.

Much of the stuff posted on Soft Robotics Toolkit takes advantage of new small-scale manufacturing technologies, such as 3D printers, CNC mills, and laser cutters, so if you’ve already invested in one of those desktop maker rigs, building actual robots might be a great next step in your never-ending quest to kill all the free time you keep finding in your hands.   All the material is very precise, giving you everything, from the designs to the types of pliable materials to use.  Everything is open-source, by the way, so you’re free to use the plans, videos, and case studies in your quest towards world domination.

Hit the link below to get started.