Solarball Cleans Three Liters Of Water On Nothing But The Sun 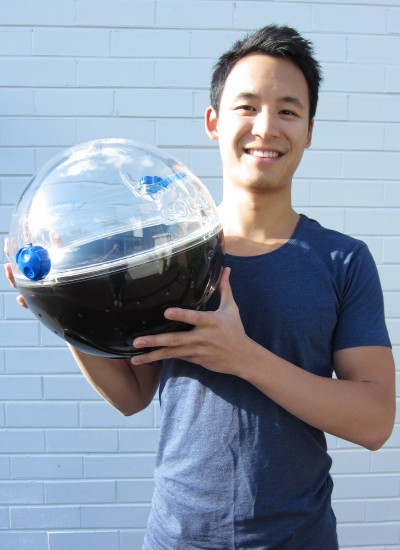 Every time I hear about small-scale water-purifying inventions, I have to remind myself that a lot of places in the world still don’t have an immediate source for potable water.  This Solarball is easily one of the most simple yet clever water purifiers I’ve seen.

Developed by Jon Liow as a  final year project while getting his bachelor’s degree in Industrial Design, the product puts sustainability at the forefront, requiring nothing but sunlight to turn erstwhile undrinkable water into something potable.  It only produces a maximum three liters of clean water per day, though — while that isn’t much, it should be enough to keep one or two people hydrated throughout the day.

The Solarball  is a weather-resistant, ball-shaped rig with an interior consisting of two chambers.  Pour the dirty water on one chamber, leave the ball under the sun and let the product do its job.   Water inside the sphere will evaporate, with the dirt left stuck on one chamber and the potable parts going down to the other for your consumption.

While designed for people in depressed rural areas (no, your smelly, stinky apartment doesn’t count as one), something like this could be very useful to outdoor-slumming adventurers, too.  You never know when you might end up washed on the shore of a deserted island without access to drinking water, after all.

Jon’s Solarball is currently a finalist in the 2011 Australian Design Awards.  A working prototype will also be on hand at the Milan International Design Fair, which is slated to take place this April.