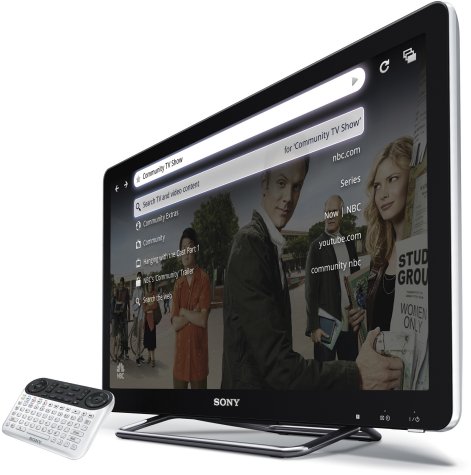 After Logitech announced their Google TV set-top box, we all knew it was only a matter of time before Sony’s HDTVs with the same features come out.  And now it has with the Sony Internet TV line.

Four television sizes are included in the initial offering: the 24-inch NSX-24GT1, the 32-inch NSX-32GT1, the 40-inch NSX-40GT1 and the 46-inch NSX-46GT1.  As promised, the new sets  let you watch regular HDTV, run apps, browse the internet and consume online content without getting up from your spot on the couch.

The Sony Internet TV line comes with the same Google TV experience as the Logitech Revue provides.  That means you can connect it to both your cable and internet connection, letting you get your entertainment fix on a single machine.  Preloaded apps include Netflix, YouTube, CNBC, NBA, Napster, Pandora and, of course, Chrome browser.  The system runs on a modified version of Android (upgradable via firmware updates) and will get access to Market apps beginning in early 2011.

Each HDTV comes with full 1080p display (Edge LED backlighting on the bigger models and CCFC for the smaller one), a built-in Atom processor, Dual View (so you can surf the web while watching TV), built-in WiFi, four HDMI inputs and four USB inputs.  Thankfully, it includes a better-looking QWERTY remote than the one Logitech is bundling.

Along with the TVs, Sony also introduced a new Blu-ray player under the same Internet TV line.  Sporting the model number NSZ-GT1, the machine has exactly the same Google TV capabilities, along with built-in WiFi,  one HDMI input, one HDMI output and four USB ports.