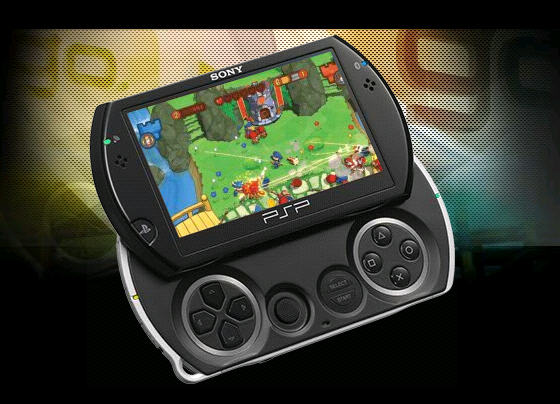 Want a smaller PSP?  Sony just launched a more compact version of its vaunted gaming handheld in the PSP Go, which sports the exact same guts as the larger PSP-3000, all while fitting nicely in your pocket.

Officially unveiled at E3 2009,  Go ditches the UMD drive to facilitate the decrease in size, while offering all the same niceties as the PSP’s previous incarnations.  Instead of the old single panel form factor, it also sports slide-down controls to keep the width within a smaller range.

The most portable PSP yet, the Go weighs a full 40% lighter than the PSP-3000, apart from coming in with tighter dimensions.  Display is a bit smaller at 3.8 inches (older PSP models rocked 4.3-inch widescreens), though it doesn’t seem to lose anything in both detail and quality.  Controls remain largely the same (despite being laid out differently) to ensure downward compatibility with all previous titles on the console.

With the loss of UMD support, the PSP Go marks Sony’s move towards downloadable titles on the new device.  As such, it comes with 16GB of onboard flash memory to hold all your games and other media, along with a Memory Stick Micro (M2) expansion slot.

As with older PSP models, the Go will come with the same interoperability with the PS3 as well as support for numerous music, video, and photo formats, with the added bonus of access to downloadable content (including movies and TV shows) directly from the PlayStation Store via Wi-Fi.  They’re also releasing the Media Go software, to allow better management of PSP content on your PC (the same way iTunes organizes your downloads for the iPod).

For the most part, the Sony PSP Go is an upgrade for the PSP, instead of a whole new device like some people were hoping for (just like Ps2 Slim was for the original PS2).  It’s smaller, lighter and more compact, while remaining functionally the same as its predecessors.  Availability of the device (in both Pearl White and Piano Black colors) for North America is expected in October, with a retail price of $249.