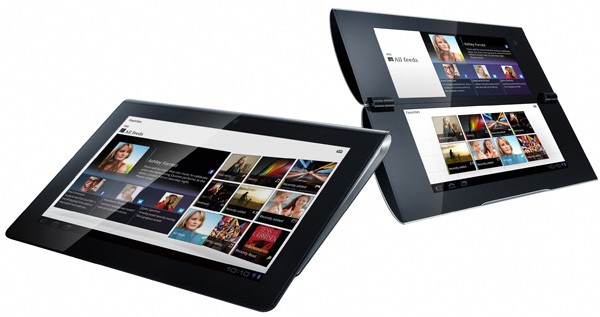 Sony just announced a pair of tablets at a press event in Tokyo.  Armed with tentative codenames, Sony S1 and Sony S2, the pair are marked by rather unusual designs.

As with most new Android tablets, both slabs run Android 3.0 Honeycomb, Google’s tablet-specific version of the mobile OS.  Each will come with the usual Android apps, along with support for Sony’s own Playstation Suite and Reader Store2.

The Sony S1 has a more traditional slate form factor, although the back is wedged, giving it a slightly raised angle when set upon a table (Sony says the design promotes stability and ease of grip).  Details include a 9.4-inch capacitive touchscreen, dual core Tegra 2 system on a chip, dual cameras (front and rear), WiFi, 3G and DLNA support.

The Sony S2 bears much of the same internals, but varies greatly on the appearance.  Sporting two 5.5-inch touchscreens (1024 x 480 resolution each), it takes on a clamshell form factor that looks like a slim black burrito.  Similar to the Kyocera Echo, the two displays can be used as single tablet interface, as well as separate display sets (when typing an email, for instance, the message is on the upper display, while the keyboard appears at the bottom panel).

From the looks of it, Sony just wanted to let people know officially that they have a pair of nice-looking tablets on the way.  No word on  pricing or exact release dates yet, but it sounds like they’re being readied for sometime in the Fall.