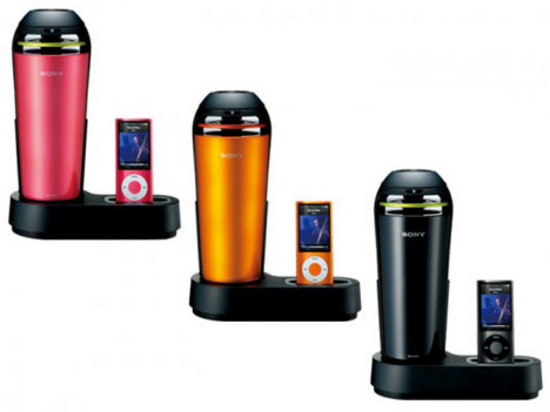 Tired of speakers that look like…uhm…speakers?  Drive guests nuts trying to figure out where the tunes are coming from with the Sony SRS-V400IP, an iPod speaker and dock  that looks like a cup holder with a matching drink tumbler.  Really.

Designed for both tabletop and in-car use, the device consists of two detachable parts: a speaker system disguised as a water bottle and an iPod dock.  For home use, you should keep both components intact, giving you a convenient iPod speaker dock that doesn’t really look like one.  In case the car stereo breaks down, just remove the tumbler, slip it into your vehicle’s own cup holder and you’ve got yourself a backup stereo system.  Just plug in the included cigarette lighter adapter, connect it to your iPod via the bundled cable and you’re good to go.

The Sony SRS-V400IP’s cylindrical speaker is equipped with a diffuser panel (the Sony Circle Sound Stage System) that will equally spread 16 watts of stereo sound an entire 360-degrees.  With the beefy audio capabilities, it might prove a quick and painless upgrade for you car stereo too, in case you’ve got a crappy one to go with your crappy vehicle (yes, I’ve seen you car – it’s shameful).

From the looks of it, the stereo doesn’t have a battery onboard, so you’re stuck using this either inside a car or near a power outlet.  We’re pretty certain the dock can be used as a real cup holder too – as long as you don’t drop any liquid on there (which, let’s face it, you will).

Audiocubes has the Sony SRS-V400IP available in three colors, priced at $239.99.

[Audiocubes via Cult of Mac]