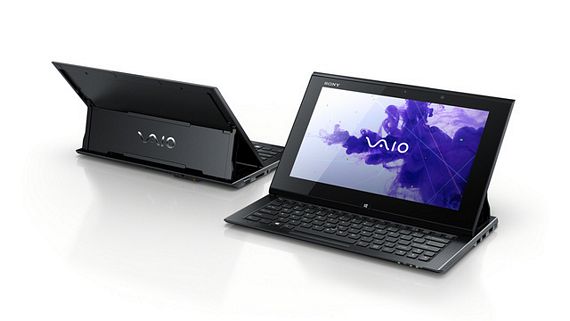 To say I’m excited about the Windows 8 hardware debuting in the next six months is an understatement.  In fact, I’ve held off buying a new laptop, tablet or phone till the end of the year (further if necessary) — I’m going to want to see what manufacturers put out for Microsoft’s new dual-mode platform.  And if the Surface tablets Microsoft showed off aren’t your cup of tea, maybe the new Sony Vaio Duo 11 will be.

Just as we expect from a lot of Windows 8 hardware, this one takes on a convertible form factor that lets you use it as both a laptop and a tablet.    Design uses a sliding panel to switch from one mode to another, which also acts as a backing stand for watching videos in a landscape profile.

Since it has a full-sized keyboard attached, the Sony Vaio Duo 11 is thicker (17.85 mm) than your usual tablets, measuring about as thick as an ultrabook.    Core features include an 11.6-inch touchscreen display (1080p, 16:9 aspect ratio), an Intel Core Ivy Bridge CPU, either 4GB or 8GB of RAM, and either 126GB or 256GB of SSD storage.  Unlike the Surface, the Keyboard isn’t detachable,  though, so you’re stuck with the extra thickness even when going in pure tablet mode.

According to Sony, there’s a heavy focus on handwriting in their implementation, which should make it a great product for students and professionals alike.  As such, it ships with an included stylus that have swappable pen tips (so you can tailor how writing feels), along with a dedicated software.

No word on dates or pricing for the Sony Vaio Duo 11 as of now.