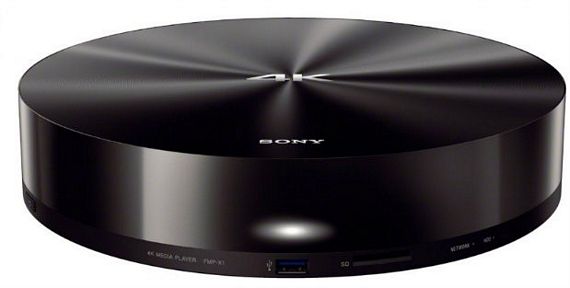 We come up with new problems all on our own.  You saw that Ultra HD TV and decided to make it your problem to need it.  And when you finally buy that 4K TV, you then stumble upon a new problem: you need a player that can send 4K content to it.  Well, here’s your solution: the Sony X1 4K Media Player.

Forget a new disc format with a bigger capacity than Bluray — this is all about downloaded and streamed digital content.  As such, Sony is debuting a new fee-based video distribution service that streams 4K content to go with the media box, letting you take full advantage of all the detail your Ultra HD TV can handle.

The Sony X1 4K Media Player sports a puck-shaped housing that you can lay flat on a table or rest against a wall, making for a sleek addition to your home theater setup.   There aren’t a lot of details released about the actual specs, but we’re assuming there’s a generous onboard storage in there, along with a wireless radio for internet access and the usual lot of video processing hardware.

According to Sony, the player will come preloaded with several video shorts and 10 full-length movies.  The titles vary, from contemporary comedies such as  Bad Teacher to pseudo-sci-fi flicks like Battle: Los Angeles to timeless classics like Taxi Driver.

Being on the cutting-edge of A/V isn’t cheap, of course.  The Sony X1 4K Media Player will retail for $699 when it debuts in the Summer and that’s on top of the $4,999 you’ll have to fork out for their lowest-end UHD TV.