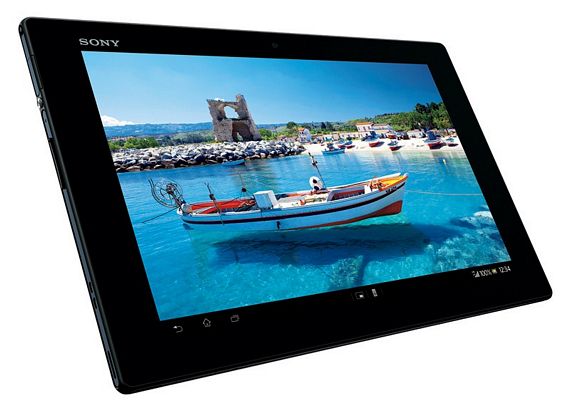 Android tablets aren’t really interesting news these days, with the market starting to flood with everything from budget Chinese releases to high-end hardware feasts.  We’ll make a brief exception for the Sony Xperia Tablet Z, which packs some of the more impressive hardware features we’ve seen in the current crop of Jelly Bean releases.

Announced in Japan, it’s a 10.1-inch tablet running Android 4.1 Jelly Bean, touting a similar design language to Sony’s CES smartphone reveals.  It’s got angled corners, a slim frame and plenty of bezel, making it look more like a mini-TV than the sleeker curves we’ve grown quite used to in our touchscreen portables.

Details of the Sony Xperia Tablet Z include a 10.1-inch display with Mobile Bravia Engine 2 (a whopping 1920 x 1200 resolution), an 8.1 megapixel Exmor R camera, WiFi, NFC, LTE, Bluetooth, S-Force virtual surround sound, 32GB of onboard storage and microSD card expansion.  Muscle is provided by a 1.5GHz quad-core Qualcomm CPU, paired with 2GB of RAM.  Battery is 6,000 mAh, which Sony declined to give any performance numbers for, however.

All that hardware is packed inside 6.9mm casing, with a total weight of just 495 grams, making it the thinnest and lightest 10-incher in the crowded tablet field. And like the Xperia Z smartphone, the whole thing is both waterproof and dustproof, giving it just that extra oomph of usability for those who like to use their tablets outdoors.

No word on release dates or pricing for the Sony Xperia Tablet Z yet.