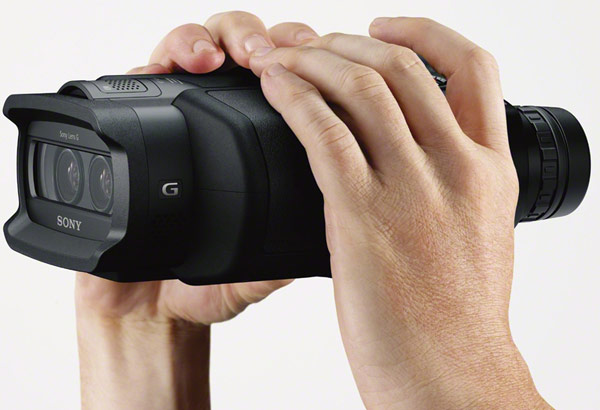 Sony just announced a pair of binoculars for the sport optics category.  Called the Sony DEV-3 and Sony DEV-5, these binoculars pair the function of field glasses with Sony’s digital camera technologies.

Styled like military night vision goggles, the digital binos are, basically, full-featured camcorders housed inside a pair of sporty field glasses.   That way, you can use it to watch birds, stalk celebrities and wait for aliens while lounging comfortably in your Brobdingnagian Giant Chair.

Both Sony DEV-3 and Sony DEV-5 binoculars  feature a pair of 1/4-inch Exmor R BSI sensors (for native 3D video capture), a pair of f2.8-f3.4 G-series lenses (with 10X optical zoom) and dual 1,227-dot viewfinders (electronic).  They can record both 1080p and 3D video directly to SDXC cards, with stereo mics taking care of the audio capture.  You can also plug in a more powerful mic and a headphone via onboard ports.  Like any proper camcorder, they can also be hooked up to your HDTV for watching all your stalker recordings.

The most notable difference between the two models is the inclusion of a GPS module on the DEV-5.  That way, you can geotag all the videos you shoot, so you’ll know exactly where you were when you spied that UFO landing on a roof during a drunken bender in Mexico.  Strangely enough, though, neither of the sporty duo comes with night vision mode.

Billed as the “world’s first binoculars with HD video recording,” it’s actually surprising a camcorder hasn’t been integrated in binos before (especially considering Pentax and Canon have been making them with digicams for years).   At any rate, the Sony DEV-3 and Sony DEV-5 will debut in November, priced at $1,399 and $1,599, respectively.