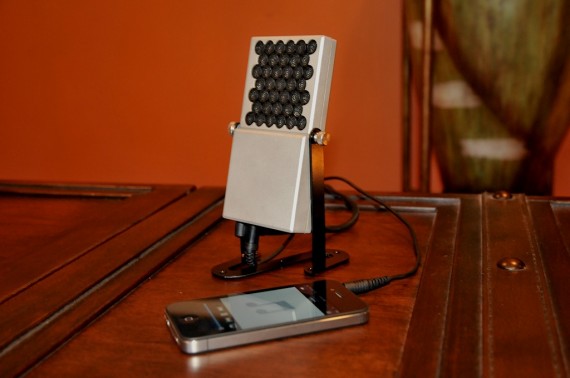 Parametric speakers aren’t anything new but to this day though, nobody has made one that users can pick up and set up on their desk for an afternoon of sound-related pranks at the office.  That will no longer be the case if the Soundlazer manages to go into production.

If you’re not familiar with the term, parametric speakers focus sound in one specific direction using ultrasonic carrier waves.  Think of it like a laser beam for audio — you need to be in line to hear the sound.  Otherwise, you don’t hear the transmission.

The Soundlazer measures roughly the size of a large smartphone, allowing you to bring it along with you like any handheld gadget.  It uses 39 piezo ultrasonic transducers to send out the audio, traveling a straight line to whatever thing you have it facing.  A swiveling stand is included, so you can adjust it to beam the sound at the exact angle you want.

What will a “sound laser” be useful for?  I can think of a bunch of things, from making your friends hear ghosts to sending subliminal messages to someone that nobody else hears to just generally creeping the heck out of people.  You can also beam it onto an object (like a wall or your Iron Man Statue), which will then proceed to spread the waves, so it appears like the sound is coming from it.

A Soundlazer kit will set you back $175 on Kickstarter.  You can also opt for a set with an aluminum case (as in the picture), which goes for $275.  They’re currently more than halfway through meeting the target funding.