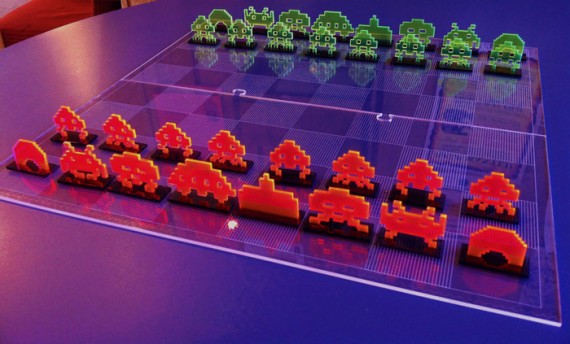 For all intents and purposes, I’m going to hate playing on the Space Invader Chess Set.  Why?  Because I’m used to chess pieces looking the same way and bringing aliens that look nothing like the usual pieces almost makes it feel like an entirely new game I’ll have to learn.  With that said, how can I not want this?

Aside from the new pieces, it’s a faithful chess game played the same old way.  Once you get over the image association of which figures play the pawns, which ones play the rooks and so on, in fact, the game should flow just as naturally as on any chess board you’ve worked your strategic wiles upon. 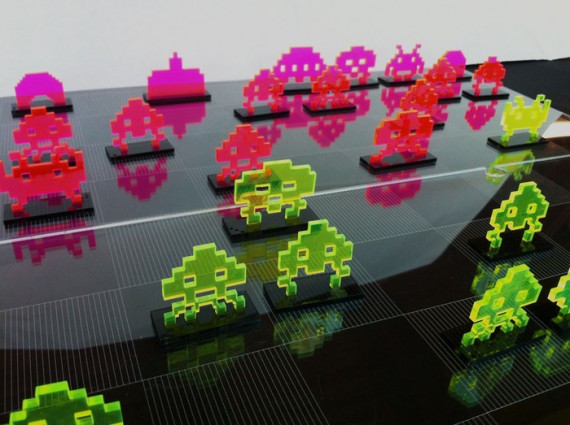 The Space Invader Chess Set features a mirrored chess board with etched surface details that make it look way more videogame-oriented than any chess set I’ve ever laid eyes on.  The pieces, though, are the real stars, using all the classic sprites from the arcade game and bringing them to life in laser-cut flourescent acrylic form.  Each of the pieces is slotted onto a snap-in base, so they can make their way around the board battling a differently-colored army that looks exactly the same.

Seriously, the acrylic Space Invader figures alone are awesome and will likely make for excellent workdesk display.  Pledges are $10 to get yourself two of the figures, $20 for nine different figures (one each of every character), $40 for the pieces minus the chess board, and $65 for the full set. You can check out the Kickstarter campaign from the link below.