Want to play Uncharted 2 on the PS3 in your living room while idling time away during lunch break at work?  Now you can with the Spawn Labs HD-720 Gaming Hub, which allows two-way communication between your remote console and a computer over broadband.

That means you can play any game you have at home on the road, provided you have someone back there to turn the thing on and load the disc in.  More sensibly, though, you can now play your console games over a network, allowing you to keep the Xbox 360 in the entertainment room (where your wife is watching American Idol). Finally, a compromise that leaves everyone happy. 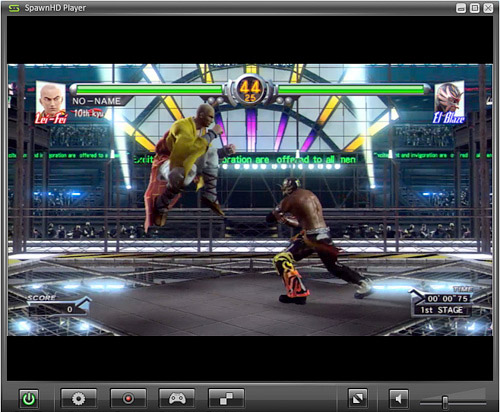 The Spawn Labs HD-720 connects to your home network via Ethernet and to your home consoles (Xbox 360, Xbox, PS3, PS2 and GameCube) via A/V and USB.  It can hook up to two consoles, but you can only play with them one at a time (you can’t open the Xbox 360 on one PC and the PS3 on another).   Requirements are right around what you’d expect – 500Kbps of bandwidth free at all times for standard-definition play (for every player that connects) and minimum 2Mbps plus a dual-core PC for HD.  Only Windows is supported as of now.

Not only can you play single missions, you can also have someone join in for a two-player session.  You can even invite spectators to watch, so you can have an audience as witness when you trash the Lakers using the Oklahoma Thunders in NBA 2K10.   Eat that, Kobe.

Spawn Labs has now started shipping the HD-720, priced at $200.  Adapters for each console costs $40 apiece.