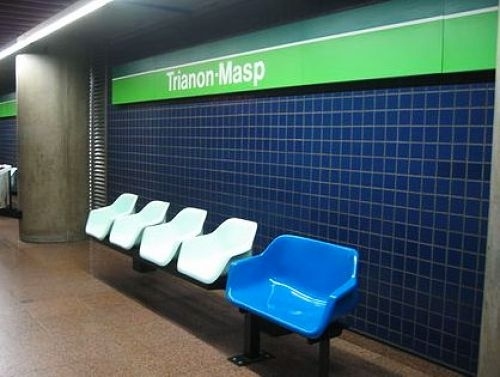 I’ve never been to Brazil, so I can’t confirm.  A news report, however, says the city of Sao Paulo has installed special chairs in the city’s train stations to accommodate fat people, who can’t fit in the otherwise slim-size seating panels in the waiting areas.  As it turns out, there’s a soaring obesity rate in the country and the chairs are a response to the increasing number of “big” individuals.

Awesome, right?  Apparently not.  According to the same report, the seats are being ignored by hefty passengers, who feel slighted at the idea.  Of course, announcements in the train stations saying that the blue-colored seats are “Priority Chairs For Obese People” (in Portuguese, of course) probably encouraged that.

Measuring almost twice the size of normal seats, they are said to support passengers of up to 550 lbs without breaking.  As you can see from the above photo, they even come with special supports at the bottom that none of the other seats appear to have.

With a sign that practically lumps fat people with the elderly and disabled, the lukewarm response to the idea isn’t all that surprising.  Personally, I would have gone with calling it a loveseat, where couples can sit together and perform public displays of affection freely.  That would have sold that seat faster than an alarm clock at a narcolepsy seminar.