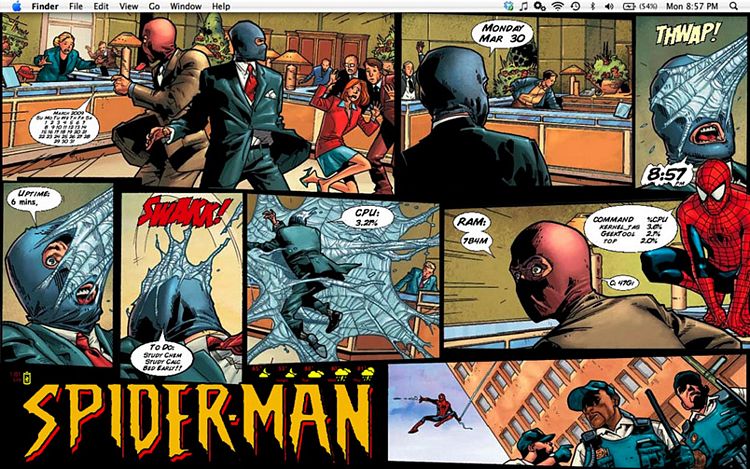 Whatever wallpaper you’re using for your Mac desktop, I doubt it’s ever going to be as cool as the SpiderMac.  Creator Zack Shackleton took a real comic book panel from the half-spider, half-comedian wallcrawler, combined it with Geektool’s stats display and created one of the coolest wallpapers I’ve seen in years.

I especially love the text bubble replacements, which show a number of system information using Geektool’s stats.  GeekTool, if you’re not familiar with it, is a utility that inserts text and images onto your Mac desktop, refreshing it every few seconds (depending on your settings).  Seriously, I’m dying with envy and a little pissed off that I’m on a PC right now.

Among the items displayed include a calendar, date, time, system uptime, to-do list, CPU usage, free disk space, memory usage, and top running processes.  It also incorporates a couple of Yahoo widgets (Weather and Battery).  The wallpaper is almost perfect, except maybe for the fact that the text bubbles are so small.  Only three things in your to-do list for real?

Now that I think about it, something like this is probably pretty useless to me.  I have apps running on top of my screen the whole time I’m working – having to minimize all apps just to look at Geektool stats will probably annoy me to death.