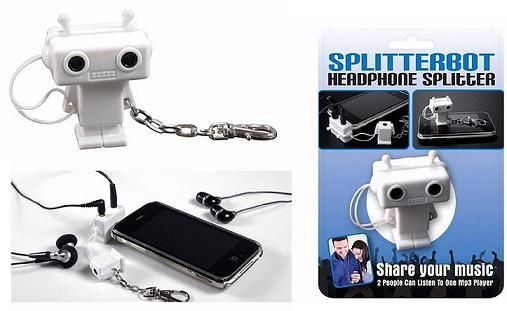 Headphone splitters aren’t anything special.  Keep telling yourself that and you might be able to resist the Splitterbot, an impossibly cute accessory that lets you turn that single audio port into two.

Clad as a painfully adorable robot, Splitterbot has a removable head that serves as the headphone splitter.  The bottom of the cranium sports a 3.5mm jack which plugs right into the audio port of your favorite music source.  You can then share the tunes between two headphones by plugging each pair of cans into either one of its beady eyes.  Yep, you’ll have to behead and blind the poor guy in order to fulfill its purpose.

About the size of a small Lego character, it can double as keychain when not in use (he’s grabbing a chain on one hand, like a whip).  Other than that, the rectangular-faced, corpse-white robot really doesn’t do anything else, except win over your affection with its irresistible cuteness.  Awwwww.

As far as robots go, the Splitterbot can’t really do anything, so it’s safe to keep with you even when the machines try to take over the world.  The music-sharing accessory is currently available for $16, which, I’m guessing, can be broken down as $2 for the splitter and $14 for the cuteness.  Worth every penny.