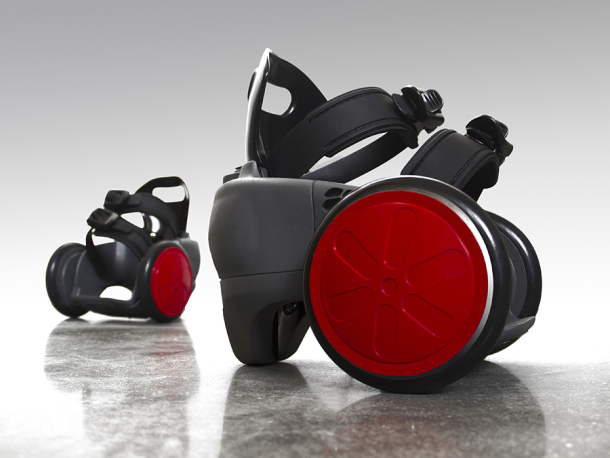 For the last couple of years, we’ve seen numerous attempts at personal mobility transporters.  And none of them have taken off quite like their creators probably envisioned.  We don’t know if the SpnKix will fare any better than the Segway and its ilk, but motorized shoes do sound a heck of a lot less intrusive than previous transporters we’ve seen.

Made by JP Works, the wearable contraption will strap onto your footwear, essentially giving it a set of wheels just like detachable skates.  Unlike regular skates, though, there’s no need to exert any effort.  With its own motor and battery, each skate can spin the wheels on its own, transporting riders at speeds of up to 10 mph.

The SpnKix is a pair of motorized skates that measure 9 x 10.5 x 9.5 inches each.  Construction is fiber-reinforced nylon and aluminum, with the motor and electronics hidden snugly inside the frame.  Both left and right units feature the same hardware set, although the tail lights come with L and R markings so you know which is which.  It can handle riders up to 180 lbs.

A wireless remote that can strap to your hand controls both feet at once, allowing you to switch the power and throttle the speed as you see fit.  The batteries, which are removable (so you can replace them when you run out while on the road), have a range of 2 to 3 miles (depending on whether you’re using it uphill, downhill or on flat surfaces) and a charging time of 2 to 3 hours.

All design, development and prototyping work for SpnKix has been finished.  Now, they’re raising money on Kickstarter to push the first production run.  Interested parties can reserve themselves a pair for $375.