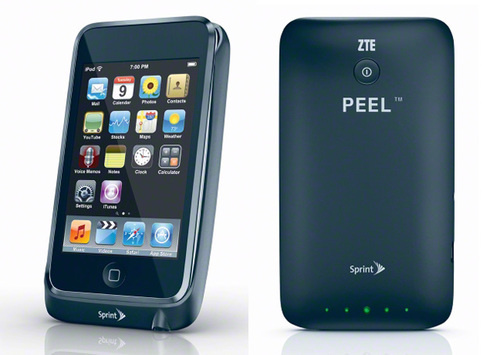 All the goodness of the iPhone, none of AT&T’s crappy service.  That’s what you should get with the Sprint ZTE Peel, an iPod Touch case with an integrated 3G service.

Running on Sprint’s network, the accessory basically adds a WiFi hotspot right into your iPod Touch.  It works just like regular mobile hotspots (e.g. MiFi), too, allowing any WiFi device to connect to it (it boasts universal compatibility), not just your iPod Touch.

The ZTE Peel slides right over your iPod Touch, making it less easier to forget at home, compared to a separate slab.  A button for activating the hotspot is easily accessible from the rear, along with LED indicators.  Granted, it adds quite a bit of heft to your erstwhile slim iOS machine, so make sure there’s enough space in your pocket for the ensemble.

We’re not sure why, but Sprint is restricting this to only two connecting devices at a time, which, in most cases, will probably be your iPod Touch and your laptop.  It supports WEP security and requires no extra software for use with any WiFi-enabled machine.

Availability for the ZTE Peel is slated for Sunday (November 14), priced at $79.99.  It requires a $29.99 monthly service plan from Sprint, which is only good for 1GB of data over 3G (yep, expensive).  There’s no contract, however, so you can cancel anytime (and be stuck with an $80 brick, which is not awesome).