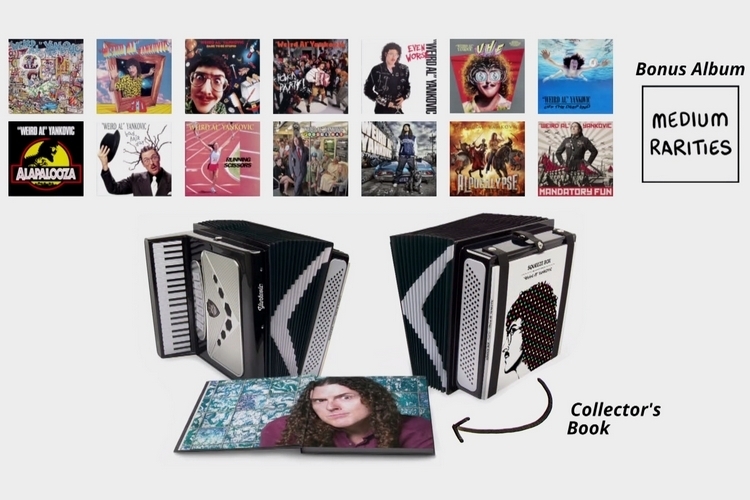 While most musical acts that started in the 70s have either burnt out, faded away, or stuck around playing small shows for nostalgic crowds, Weird Al has somehow managed to remain a relevant artist in 2016. Heck, he had his first number one album back in 2014. This year, the long-running parodist is celebrating that longevity with an exhaustive box set called Squeeze Box: The Complete Works of Weird Al Yankovic.

Released by Legacy Recordings, the set bundles all of the artist’s 14 official albums, ensuring you can take a listening trip down the rabbit hole that is Yankovic’s career. Whether you want to rock out to his older parodies, listen to one his 10-minute ditties, or jam with some of his newer productions, this collection definitively has them all.

Along with the 14 albums, Squeeze Box gets a bonus 15th album that contains demos and other unreleased tracks, so you can get your fill of fresh content even without any new recordings. All the older tracks have been remastered, by the way, so these should totally sound better than the cassette tapes you still have boxed up in the attic. They also threw in a 100-page hardcover book that cobbles together a bunch of rare photos and Weird Al memorabilia.

You can get the box set with either CDs or 150-gram vinyl, so you can get your physical records exactly the way you like it. The best part? The whole thing comes in a box done up as a replica of Weird Al’s accordion.

Pricing for Squeeze Box: The Complete Works of Weird Al Yankovic starts at $265.