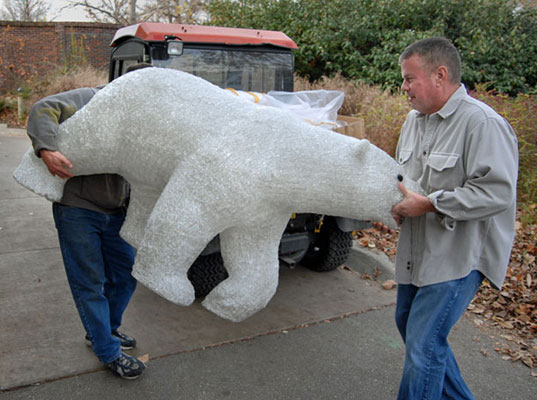 Your zoo’s star polar bears just died.  What do you do?  Scramble to find replacements?  Bribe other zoos to send you theirs?  Or, just say, “The heck with it, we’re building robots.”  The latter appears to be what St. Louis Zoo officials did, installing Robot Polar Bears just in time for the holiday season.

The last of the three Arctic beasts that lived in the zoo, Hope, was euthanized early in the year after suffering from liver cancer (see, I told you, bears should stay away from alcohol).  With only 81 polar bears still residing in American zoos, finding new ones to take over the areas vacated by the facility’s old ward probably wasn’t the easiest task.  As such, the creative solution.

To their credit, the robot polar bears look pretty awesome.  If they moved half as cool as they looked, they can probably trick a four year old into thinking they were real.  Five year olds may be a little too savvy.  I mean, come on, how realistic can a robot bear be?

PETA is dipping their toes on this one, screaming words of encouragement at the zoo to  have them continue their forays into animatronic creatures.  That’s right – PETA wants robots in your zoos.  While I’m staying away from the politics of that one, you seriously might as well stay home and watch Animal Planet when that happens.  At least, the filmed animals are real.

The Robot Polar Bears will be featured in the Wild Lights exhibit this Christmas season.  Their fate, post-holidays, is still up in the air, though.  Just a thought: why not just use mascots with realistic costumes, instead?  That sounds a heck of a lot more manageable, not to mention 100% immune from the potential robot uprising.