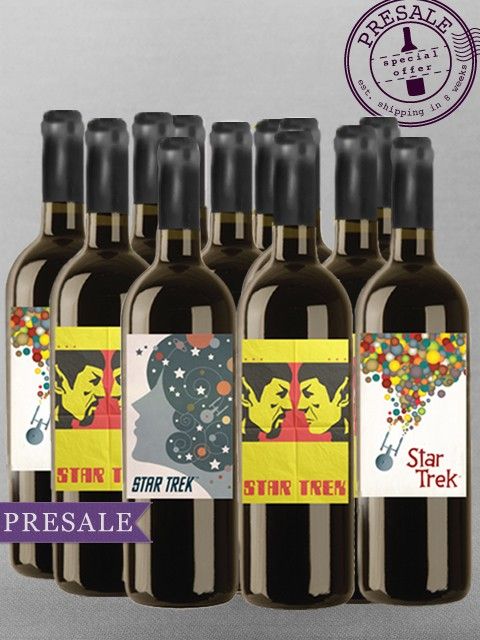 Regular things always seem better when they’re branded with your favorite movie franchise, whether it’s GI Joe Sunglasses, Star Trek Bathrobes or Star Wars Coffee.  Alcohol supplies are no exception, which is why you’ll probably want to stock your basement with the Star Trek Wine.

Granted, these things aren’t nearly geeky enough to soften the gruffest Trekker among us.  I mean, if I’m drinking Star Trek wine, they might as well make it look like Romulan Ale or something, right?  Still, we’re guessing this will make a fine batch for the slightly more sophisticated set (note: just slightly — you’re still a Star Trek nerd, so yeah).

Instead of alien beverage, the Star Trek Wine is actually regular wine sourced from Viansa Winery in Sonoma, California.  And we’re sure it has no Romulan Ale mixed in, as the product page describes it as a “medium-bodied red blend of Merlot, Sangiovese, and Cabernet Franc.”  They come in regular wine bottles, too, which sort of dampens some of the fun.  On the upside, they will be available in a limited 1,701 cases, so you can buy all of them if you have the budget and harbor desires to hoard every single bottle of the world’s Star Trek Wines all to yourself.

Each of the bottles come with one of three original labels depicting an episode of the show.  Created by artist Juan Ortiz, it draws from three episodes in The Original Series, namely “The City on the Edge of Forever,” “The Trouble with Tribbles,” and “Mirror, Mirror.”  The artwork is officially commissioned by CBS.

The Star Trek Wine is currently available on preorder, priced at $24.99 a bottle.