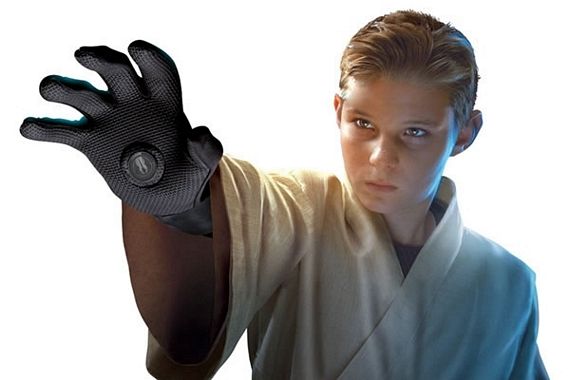 Ever met someone who sincerely believed they had mind powers that let them move things without touching them?  Well, you can now join them in their delusions of supernatural abilities with the Star Wars Force Glove, which lets you move objects by merely aiming your hand at them.

By objects, we don’t mean every object in sight, though.  In fact, we only mean the included targets that come with the set, which consists of a trio of droids and a lightsaber (a really small one — not that awesome LaserSaber).  Despite that, it should still make for some entertaining time — put the targets on your end of the conference room desk and command it to move away from you to the other side for some giggles while waiting for a meeting to start, for instance.

Made by Uncle Milton, the Star Wars Force Glove features a removable disc-shaped magnet on the palm, which performs the “telekinetic” Jedi tricks.  The included targets also have a magnetized base, which is how you’re able to push or pull them towards your hand.  One side of the magnet will push the targets while the other side will pull them — simply remove and flip the magnet according to what trick you’d like to do.

We’re not sure if it can work with other magnetized objects, but it seems likely, so you might be able to pass off this magical trickery as an actual act for entertaining your kids.  Of course, this was intended as toy for your kids, so what the heck are you doing with it again?

The Star Wars Force Glove is available now, priced at $19.95.