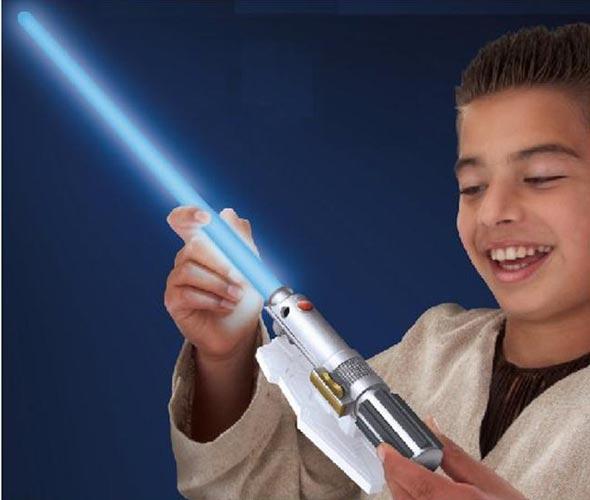 By night, it helps you sleep soundly. By day, it lets you slay enemies of the Force. It’s the Star Wars Lightsaber Room Light and it’s the weapon of choice for Jedis who can’t sleep without the lights on. Tee-hee.

In the bedroom, you keep it on the wall, illuminating your nights with its low, understated glare. There are monsters in your room? Fear not. Straddle up to the mounting spot, draw your lightsaber and battle them to the death. Don’t forget to dine in hell before all that fighting, though. 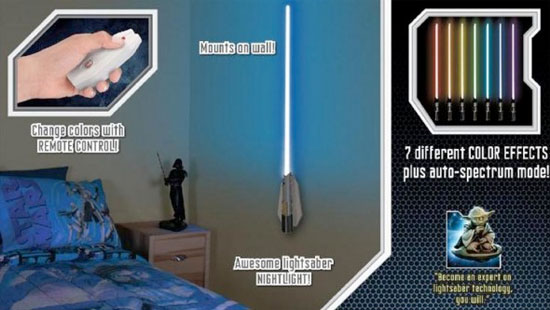 The Star Wars Lightsaber Room Light comes with its own wall mount, allowing you to hang it where every visitor can see. You want everyone to know you’re a Jedi, after all. More than a simple nightlight, though, it has color changing powers, allowing it to alter its appearance using one of seven color effects. All that color-changing can be controlled via an IR remote, giving you an opportunity to tell gullible girls that the saber is feeling uneasy, because the vibration in the room is negative and she will have to do your bidding to make everything right. Of course, that’s presupposing Star Wars geeks are even able to get girls into their bedrooms, but I digress. Stranger things have happened.

Designed for kids (well, big kids are fine too), it comes with a user’s guide that teaches you how lightsabers work. We’re not sure whether it talks about the nighlight lightsaber or the ones Luke Skywalker and company uses for fighting in the movies, but if it’s the latter, I doubt Star Wars fans will actually need a lecture. Heck, they might even give you their own two hour spiel on that.

Slated for availability in the third quarter of 2010, the Star Wars Lightsaber Room Light is now on preorder for $24.99.