Stay Clean On The Road With These Portable Showers 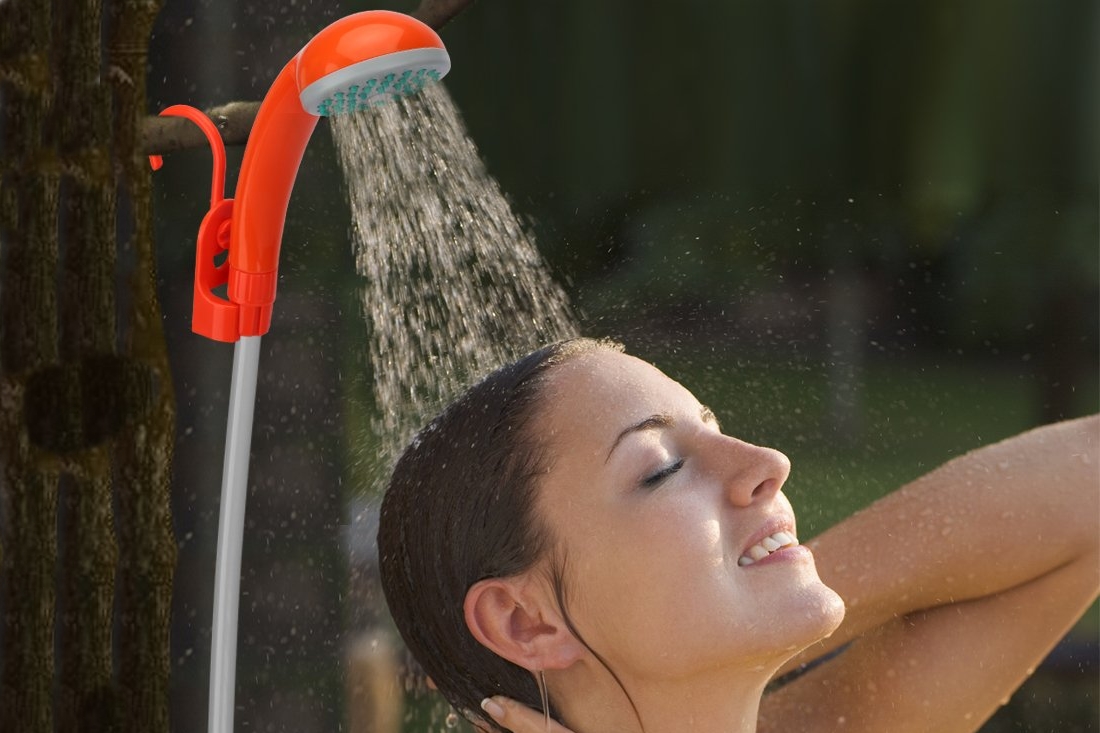 There are few things more refreshing after a long day than a warm shower. Feeling the spray of water on your skin just has a way of soothing the stresses and worries that plague you throughout the day. Problem is, a shower isn’t usually a readily available option when you’re spending the day camping. At least, it wasn’t for a long time, until portable camping showers started hitting the market.

We’re not quite when portable showers started becoming a thing. All we know is, from the moment we first saw the Nemo Helio six (or maybe seven?) years ago, we were certain that a camping shower was set to become a fixture in our car camping ensemble. Of course, our experience with camping showers have expanded greatly since then, with the sheer number of new products hitting the market.

If you spend a lot of time outdoors and haven’t used a portable shower, you are seriously missing out. Not only are they great for cleaning up all the dust, dirt, and sweat off your body, they’re also useful for a handful of things around camp, such as washing dishes, cleaning up gear, and giving your car a good wash if you can’t stand the sight of your 4×4 covered in mud.

Here are some of the camping showers we’d gladly recommend. 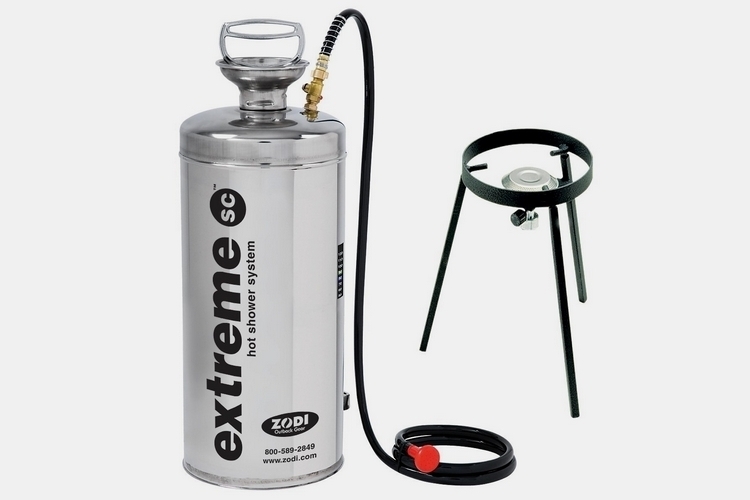 ZODI’s backcountry shower solution consists of a 10,000 BTU tripod stove and a three-gallon stainless steel water container with an integrated hose and showerhead. Yep, they included a stove that’s perfectly sized to hold the container, so they can heat the water right before you start the shower. An integrated temperature indicator allows you to monitor how hot the water is (you don’t want to shower with boiling water, after all), with the outfit recommending around five minutes of heating to get it to around 100 degrees Fahrenheit, while an integrated hand pump allows you to pressurize the tank as needed to make sure you get a satisfying spray. And yes, the stove can double as a regular camping stove, so you can use it to cook your meals around camp.

Make sure, by the way, to remove the water container from the stove after heating, in order to avoid accidentally dragging on the hose and having it fall off. In case it ever does, though, don’t worry, as this is one of the more durable camping showers we’ve seen, so it’s not likely to take any serious damage. 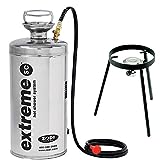 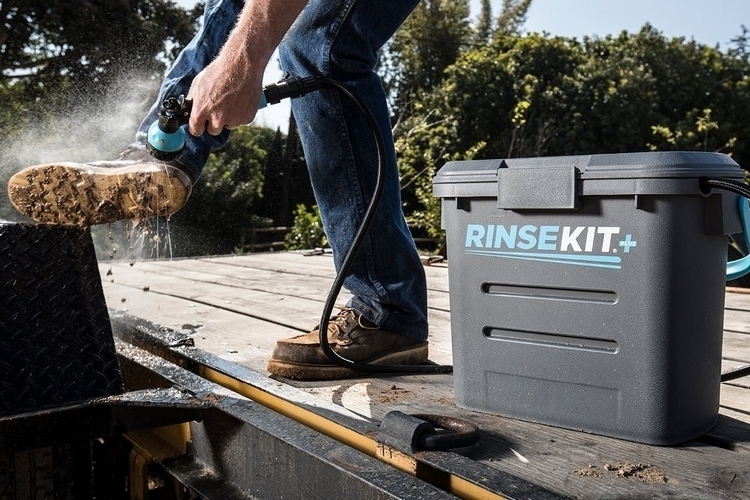 Unlike other portable showers, the Rinse Kit Plus doesn’t require any pumping or batteries to generate pressure. Instead, it isolates and stores pressure when you fill it up with water from a faucet using either the included hose bib adapter or hot water sink adapter. That means, you can’t just fill it up with water from a river or a lake, as doing so won’t allow you to pressurize the tank at the same time. If that’s not a deal-breaker, this particular version of the Rinse Kit has a two-gallon water tank that also stores approximately six minutes’ worth of water pressure, which should be enough to get you a few showers, if you use them sparingly (it has six spray settings, so you can minimize resource use if you want to).  It’s insulated, too, so if you fill it with hot water, it should still be reasonably warm when you use it within the same day.

While we probably won’t be taking this to extended camping trips, this portable shower should make a good solution for day trips and overnight camping, allowing you to keep a functional hot shower in the car, ready to deploy as soon as you need it. 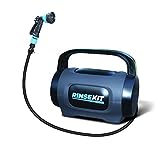 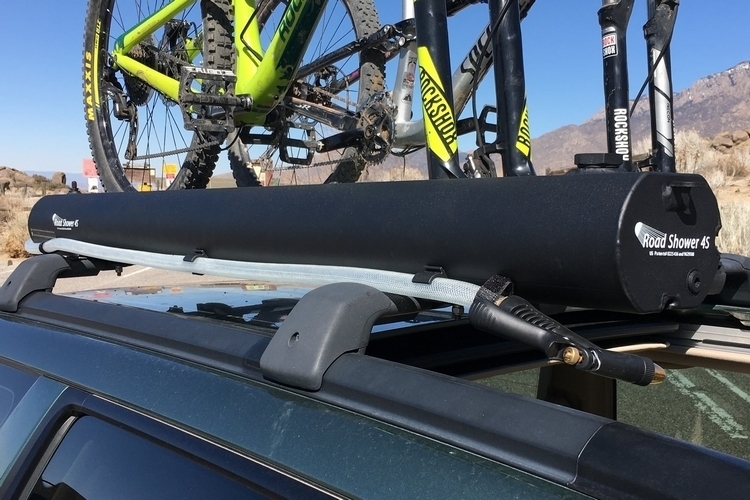 Designed for mounting on your car’s roof rack (it comes with universal brackets), this portable shower comes with a tube-shaped water container that holds up to four gallons of water. Made with powder-coated aluminum, the metal shell absorbs radiant heat from the sun while you drive to your destination, incidentally heating the water inside using it. It has a Schrader-style valve for hooking up to any air pump in order to add instant pressure, so there’s no need to do any manual pumping, while a built-in thermometer shows the water temperature in both Fahrenheit and Celsius, so you can brace yourself if it’s in the colder end of the scale (sometimes, days are just unusually cloudy). It has adjustable flow rates, too, so you can use the entire thing for a single shower or stream it sparingly, in case you can’t refill for a bit. 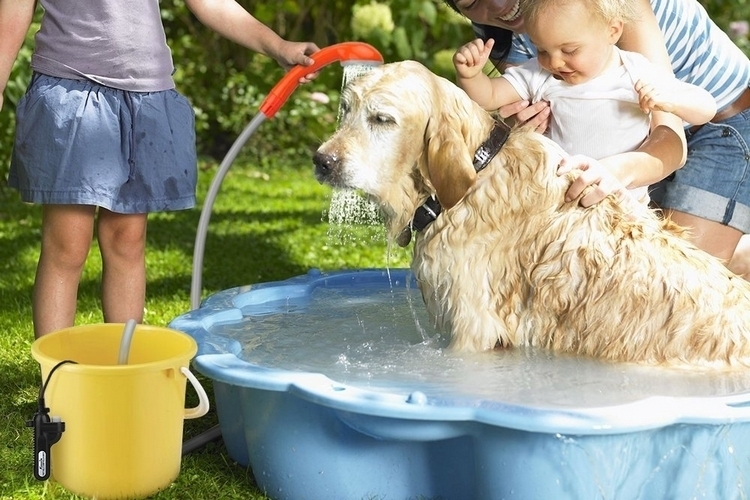 Most portable showers are designed for car campers, since carrying a multi-gallon container full of water isn’t exactly ideal for those who will spend a good amount of time hiking. If you still want a nice shower while hitting the trails on foot, powered hose systems like this one from Iron Hammer should be your best bet. Consisting of a hose with a showerhead on one end and a battery-powered suction pump on the other, you simply turn on the power, submerge the suction part into a water source (a bucket of water will do), and start spraying yourself with a relaxing mist. It has a wide showerhead, so you can get a satisfying stream, while a waterproof build ensures all electronics are kept safe.

If you’ve looked around, you’ve probably noticed several portable showers with a similar design. We’re particularly fond of this one, as it actually separates the battery from the pump, ensuring you can keep the battery out of the water to eliminate the chance of any accidents. It also includes a swappable spare battery, so you can charge one while using the other (both have a 60-minute operating time), allowing you to take a shower without having to wait for the battery to recharge. 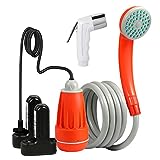 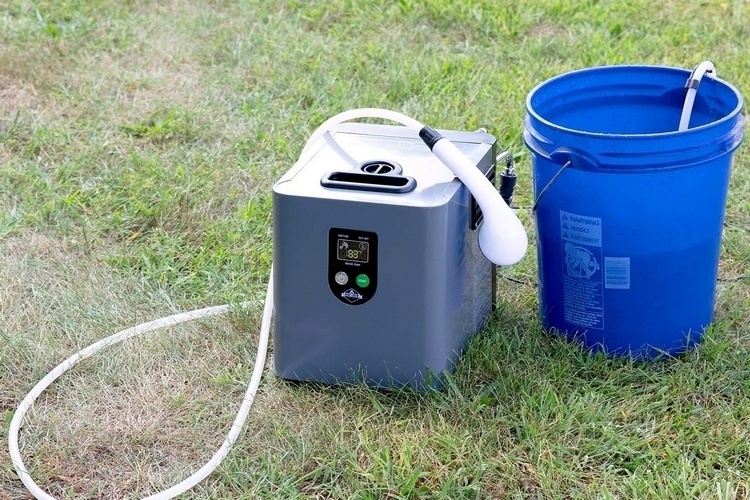 At a boxy 12.2 x 9.6 x 11.8 inches (depth x weight x height), it’s bigger than your usual camp shower. If you’re carrying it in a car, though, that doesn’t really matter, so you may as well get one that will give you the best showers. A water heater system, it comes with a pump that you place in a bucket of water, which it then uses to siphon water that it heats up to your desired temperature. A second hose connects to a shower head that allows you to spray all that warm water to clean up after a long day in the trail. It can heat water up to 125 degrees Fahrenheit using a propane canister, although you’ll need a power source to get the pump running (either a 12V power adapter or an AC/DC outlet). We know, it’s a little demanding, but if you’re taking a bunch of creature comforts along, you may as well bring a proper shower, too. 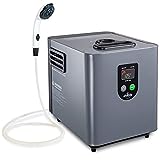