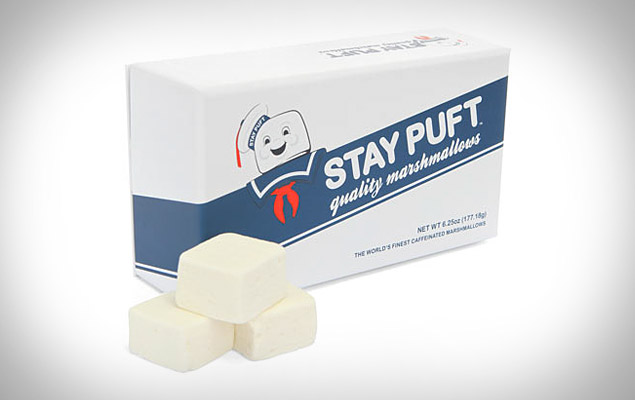 Roast marshmallows by the campfire, stay up all night.  That’s what you’ll be doing when you skewer your hotdogs with the Stay Puft Quality Marshmallows, a heavily-caffeinated treat, dutifully endorsed by everyone’s favorite lumbering, paranormal monster.

Officially licensed by the Ghostbuster franchise, the product features the smiling mascot that destroyed parts of New York City prominently in the packaging.  Lucky for you, that’s where the similarity with the real Stay Puft ends, so the sugary mallows might melt in your mouth, but they won’t have to taste like ectoplasm. 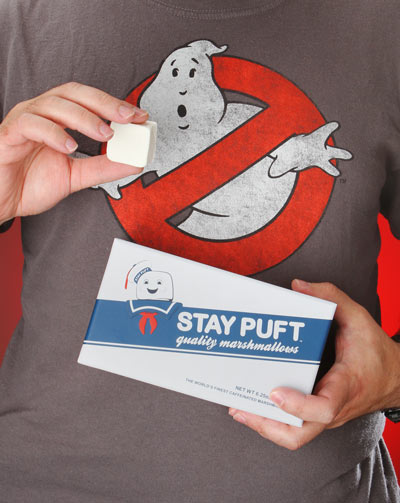 The Stay Puft Quality Marshmallows are actually gourmet treats – which is a shorter way of saying they’re supposed to be especially delicious.   Even better, every single square piece is infused with over 100mg of caffeine, so all you need is to pop one to get you through the next meeting.

Each 7 x 4 x 2.5 inch box comes with sixteen marshmallows and weighs 16oz.  Designed as a collectible packaging, the box itself has a soft and cushy feel – just like a marshmallow all on its own.

Sure, downing a dozen Stay Puft Quality Marshmallows isn’t half as fun as munching on one of the real Stay Puft’s legs.  We’re willing to be you’ll be wide awake and restless for the next couple of hours after that, though.  It’s available for $19.99.  Do note: whoever sold it isn’t liable for the guaranteed death and destruction when the damn things are inhabited by evil spirits and  transforms into a giant sailor marshmallow monster.

Best get your proton packs ready.